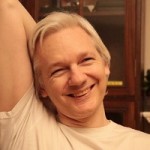 Swedish prosecutors have dropped an investigation into allegations of sexual misconduct by WikiLeaks founder Julian Assange. Assange has denied the allegations, which he calls a pretext for his ultimate extradition to the U.S. to face prosecution under the Espionage Act.

Human Rights Lawyer: Sweden Dropping Investigation of WikiLeaks’ Assange is “Long Overdue Decision”
Swedish prosecutors have dropped an investigation into allegations of sexual misconduct by WikiLeaks founder Julian Assange. Assange has denied the allegations, which he calls a pretext for his ultimate extradition to the U.S. to face prosecution under the Espionage Act. Since 2012, Assange has taken refuge in the Ecuadorean Embassy in London. It’s not clear whether Assange will emerge any time soon. “This is a small victory, but in this long road to free Julian Assange and all the people working for WikiLeaks,” says guest Renata Avila, a Courage Foundation trustee and human rights lawyer. “But it will finally help us lawyers to focus on the main issue, which is the persecution, the political persecution, and imminent prosecution of Julian Assange in the United States.”

“Repair the Damage from the Drug War”: Susan Burton on A New Way of Life to End Mass Incarceration
Two leading voices in the fight against mass incarceration are Michelle Alexander, author of the best-selling book “The New Jim Crow: Mass Incarceration in the Age of Colorblindness,” and Susan Burton, founder and executive director of A New Way of Life, a nonprofit that provides housing and other support to formerly incarcerated women. Burton is the author of the new memoir, “Becoming Ms. Burton: From Prison to Recovery to Leading the Fight for Incarcerated Women,” in which she describes her journey from a childhood filled with abuse to drug addiction as an adult, and then to the fight to address the underlying issues that send women to prison. Alexander writes in the book’s introduction, “There once lived a woman with deep brown skin and black hair who freed people from bondage and ushered them to safety. She welcomed them to safe houses and offered food, shelter, and help reuniting with family and loved ones. She met them wherever they could be found and organized countless others to provide support and aid in various forms so they would not be recaptured and sent back to captivity. … Some people know this woman by the name Harriet Tubman. I know her as Susan.”