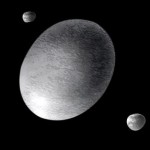 Editor’s Note: This was published several years ago and was our best take on Haumea at the time. We’ve learned a bit since then and will be back with an updated article.

The discussion about the planet definition and about Pluto’s status continues. The official definitions can be obscure, so let’s briefly recall the astronomical facts.

In August 2006 the International Astronomical Union (IAU), which approves names and categories of celestial bodies, gathered in Prague and approved the first-ever definition of a planet. As a result, Pluto’s designation was changed from planet to a new category, dwarf planet. The first members of this category were Ceres, Pluto and Eris. At the time, Eris had not yet received a proper name and was known as 2003 UB313. That left eight “official” planets in our solar system: Mercury, Venus, Earth, Mars, Jupiter, Saturn (the classical planets of antiquity), plus Uranus and Neptune (two of the modern planets).

The Prague meeting recognized the dwarf planet Pluto as an important prototype of a new class of trans-Neptunian objects. The IAU would set up a process to name them.

In June 2008 the IAU chose the name “plutoid” as name for Solar System objects like Pluto, i.e. dwarf planets that orbit beyond Neptune. Only the brightest of the dwarf planets fit in this category though. The two known and named plutoids at the time were Pluto and Eris. The two other objects discovered by this point that qualified as a plutoid were 2003 EL61 (which became Haumea) and 2005 FY9 (which became Makemake). The dwarf planet Ceres, located in the main asteroid belt, is the only object of its kind, so a separate category of Ceres-like dwarf planets was not proposed. Ceres is unusual because it accounts for one-third of the mass of the entire inner asteroid belt.

In July 2008 the IAU gave the name Makemake to the object formerly known as 2005 FY9 and officially made it the newest member of the plutoid family and also classified it as the fourth dwarf planet in our Solar System.

On September 17, 2008, the IAU announced that the object previously known as 2003 EL61 was classified as the fifth dwarf planet and named Haumea. The two moons of Haumea were named Hi’iaka and Namaka.

Haumea is one of the three bright objects whose existence was announced in July 2005. The two other bodies were Eris and Makemake. Mike Brown’s team — the discoverers of Haumea — nicknamed it “Santa,” because they were observing it around Christmas in 2004.

Haumea was discovered on December 28, 2004 — two days after the Asian tsunami. In the discovery chart of Haumea it is located in a tight conjunction with asteroid 8543 Tsunemi. Of course, the name Tsunemi originally has nothing to do with tsunamis. The JPL Small-Body Database tells me that asteroid Tsunemi was named after Hiroshi Tsunemi from Osaka University, a scientist who has worked in X-ray astronomy.

Astrologer Jacob Schwartz has noticed that sometimes the names of asteroids work very well, although they are chosen seemingly whimsically to honor colleagues, family members, familiar places, etc. “The sounds of names ascribed by these astronomers carry a cycle of meaning relating to events and experiences far beyond the meaning intended by the scientists who named them,” he writes.

In the New Moon chart of Sept. 29, 2008, Haumea was together with asteroid 916 America at 14+ Libra. The focus of the whole world was on the economic crisis and the presidential election in the USA. Note that 14+ Libra was the ascendant of the chart of the Sept. 11 false flag attacks. The planet Mercury was rising at the time, also located precisely in that degree.

Haumea is named after the goddess of childbirth and fertility in Hawaiian mythology. The Sabian Symbol for the discovery degree for 12+ Libra is beautiful and aptly speaks about children: Libra 13. Children blowing soap bubbles.

“This is a symbol of man’s reassurance through the presence of the beautiful and the good in every least promising form of human relationship,” Marc Edmund Jones writes in his book of Sabian symbols. “People are disposed kindly toward their fellows, but there is no growth in the mere rhythm of everyday routine, and human individuality knows it must be up and at the business of selfhood whether constructively or otherwise. Implicit in the symbolism is the challenge to rise above childish things while yet clinging to childlike ways. The keyword is enchantment. When positive, the degree is a consistent simplicity of character which enables anyone to maintain his touch with a transcendental magic of being, and when negative, a constant and idle daydreaming.” 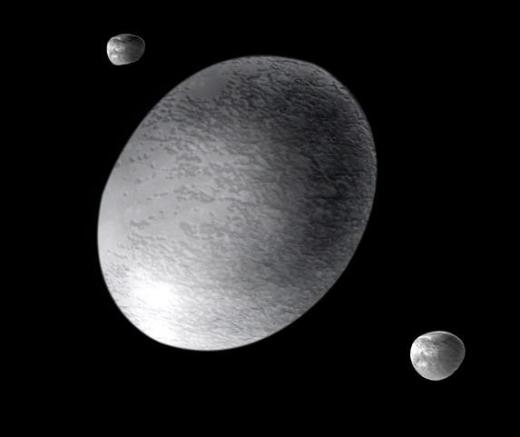 An artist’s impression of Haumea with its moons. Image by NASA.

Haumea is one of the strangest objects in the Solar System. It is the third largest Kuiper Belt object after Eris and Pluto. In the very distant past another object probably slammed into Haumea at high speed, and this giant impact led to all of its odd properties.

Haumea is the fastest rotating body and also the most bizarrely shaped body of its size class. The rotation period is only about four hours. The shape of Haumea is therefore stretched out and resembles an American football. The rotation time is near the point where body of this size starts to break down.

Haumea has two tiny moons. In mythology Hi’iaka and Namaka are two of Haumea’s children. Hi’iaka was born from the mouth of Haumea and carried by her sister Pele in egg form from their distant home to Hawaii. She danced the first Hula on the shores of Puna and is the patron goddess of the island of Hawaii and of hula dancers. Namaka is a water spirit, who was born from the body of Haumea. When Pele sends her burning lava into the sea, Namaka cools the lava to become new land.

Haumea’s many children sprang from different parts of her body. She takes many different forms and has experienced many different rebirths. the Kuiper Belt object Haumea is followed in its orbit around the Sun by a swarm of icy bodies that were originally ejected from the surface of Haumea during the giant impact. According to Mike Brown the goal is to name also these members of the family specifically after other mythical children of Haumea.

The goddess Haumea represents the element stone. Observations of the dwarf planet Haumea hint that, unusually, it is almost entirely composed of rock. Most things out in the Kuiper Belt (the band of space that Pluto occupies) are about equal portions of rock and of ice, but, apparently, Haumea has only a thin icy outer shell and the interior is rock.

Haumea is on an unstable orbit and possibly becomes a comet one day in the future, in perhaps a billion years. According to its discoverer, Mike Brown, it will probably be 10,000 times brighter than the spectacular comet Hale-Bopp, making it something like the brightness of the Full Moon and easily visible in the daytime sky.

Astrologers never demoted Pluto. Many of them are now working to establish also the astrological meaning of Haumea. This is a long process. Eric Francis has summed up the process of understanding a new planet excellently in his answer to a curious reader a couple of years ago: How Can Astrologers Already Interpret Xena’s Meaning?

7 thoughts on “Haumea, one of the strangest objects in the Solar System”