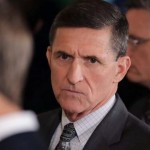 On Monday, Trump’s national security adviser was forced to resign after The Washington Post reported on leaks of classified intelligence revealing that Flynn had engaged in talks with the Russian ambassador to the United States during the transition period, while Barack Obama was still president.

While congressional Democrats and some Republicans are pushing for probes into Trump’s ties to Russia, Trump has focused largely on going after those who have leaked information to the press. On Monday, Trump’s national security adviser was forced to resign after The Washington Post reported on leaks of classified intelligence revealing that Flynn had engaged in talks with the Russian ambassador to the United States during the transition period, while Barack Obama was still president. In a tweet this morning, Trump wrote, “The spotlight has finally been put on the low-life leakers! They will be caught!” On Wednesday, he wrote, “Information is being illegally given to the failing @nytimes & @washingtonpost by the intelligence community (NSA and FBI?) Just like Russia.”

Greenwald: Democrats Seem to Consider Snowden’s & Manning’s Leaks Evil & Leaks Under Trump Heroic
Over four years ago, NSA whistleblower Edward Snowden warned that he or other NSA analysts could spy on anyone, even the U.S. president. “I, sitting at my desk, certainly had the authorities to wiretap anyone, from you or your accountant to a federal judge, to even the president, if I had a personal email,” Snowden said in an interview with Glenn Greenwald in Hong Kong. Greenwald speaks about the difference between how Washington reacted to Snowden’s leaks and today’s leaks about Gen. Michael Flynn.

Greenwald: Empowering the “Deep State” to Undermine Trump is Prescription for Destroying Democracy
Some supporters of Trump, including Breitbart News, have accused the intelligence agencies of attempting to wage a deep state coup against the president. Meanwhile, some critics of Trump are openly embracing such activity. Bill Kristol, the prominent Republican analyst who founded The Weekly Standard, wrote on Twitter, “Obviously strongly prefer normal democratic and constitutional politics. But if it comes to it, prefer the deep state to the Trump state.”

Glenn Greenwald: Trump Seems to Be Committed to Escalating Violence in Yemen
White House Press Secretary Sean Spicer has warned journalists and lawmakers against criticizing a botched raid by U.S. commandos on a Yemeni village last month that left 25 civilians and one U.S. Navy SEAL dead. The Bureau of Investigative Journalism reports the January 28 assault killed nine children under the age of 13, with five other children wounded. The attack came as the United Nations appealed for $2.1 billion in emergency aid to Yemen, warning 12 million people face the threat of famine brought on by a U.S.-supported, Saudi-led war and naval blockade.

Greenwald on Trump-Netanyahu Meeting & How Israel Is Turning into an Apartheid-Like State
President Donald Trump on Wednesday ended a long-standing U.S. commitment to the establishment of a Palestinian state, saying he had no preference for either a one-state or two-state solution to the Israeli-Palestinian conflict. The remarks came as Trump welcomed Israeli Prime Minister Benjamin Netanyahu to the White House, and represented a break from 20 years of official U.S. support for an independent Palestinian state alongside Israel. Glenn Greenwald says, “Donald Trump is empowering some of the worst extremists in the world when it comes to Israeli policy.”

Trump Is Asked About Rising Anti-Semitism in U.S., He Responds by Boasting About Election Victory
During Wednesday’s press conference, President Trump was asked about a rise in anti-Semitic attacks and vandalism across the U.S. An Israeli reporter asked, “What do you say to those among the Jewish community in the states and in Israel and maybe around the world who believe and feel that your administration is playing with xenophobia and maybe racist tones?” Trump responded by bragging about his election victory.

One thought on “Greenwald on Flynn-Russia Leaks: Illegal & Wholly Justified”