If you could combine excitement with stability — and expect good results — where would you apply that in your life? A trine between retrograde Saturn in Sagittarius and Uranus in Aries suggests that something to do with your spiritual understanding of yourself might be one area to consider. What unanticipated ‘first’ is ripe to occur in a primary structure of your life?

“Education is an important element in the struggle for human rights. It is the means to help our children and our people rediscover their identity and thereby increase their self respect. Education is our passport to the future, for tomorrow belongs only to the people who prepare for it today.”
— Malcolm X

News out of the Trump administration has moved this week at the speed of Uranus multiplied by Eris in Aries — the light-speed of the internet. The current cascade of events, peaking yesterday with the naming of a special prosecutor to investigate the various Russia affairs, will likely lead to the end of Trump’s presidency. 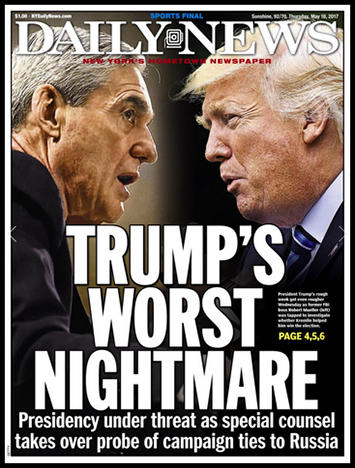 This cascade began over the weekend of May 6 and 7, when Mercury, slow and powerful after its recent retrograde, was ending its alignment with Uranus conjunct Eris.

The combination of Mercury, Uranus and Eris is a reminder that everything we see happening, and how it’s happening, is an effect of the internet. This effect is created by a nonstop onslaught of disembodied communication, and developments moving faster than anyone can keep track of or understand.

Trump, with his penchant for tweeting and his addiction to toxic chaos, is only amplifying that effect. But don’t mistake that for his being “internet savvy.” He’s actually a product of television, and his mind is stuck in a TV mentality.

Additionally, there’s been a restructuring, or perhaps de-structuring, of the underlying ground of reality; among other changes, this officious thing previously known as ‘the presidency’ no longer seems to exist. Like many of society’s institutions, from home mortgages to Hollywood, the presidency is being shredded into a slag heap. Whether this serves a positive purpose is a question worth asking.

That’s being described by the ongoing movement of Pluto through Capricorn, which has yet to have its most profound influences [see recent article on the U.S. Pluto return]. Over the next few years, into the early 2020s, Pluto will make a series of square aspects to Eris, which will combine the effects of Uranus square Pluto and Uranus conjunct Eris.

For a bonbon-sized preview of what’s coming, here are the latest developments in the news.

If Your Birthday is May 19
(The Day of Heartfelt Persuasion) | Taurus Birthday Reading | All Other Signs
To feel better, focus your healing where your emotions meet your physical body. There’s more than just a deep connection; they are one and the same. Releasing toxic emotions will give you energy, nourish and strengthen your body, and your mood will be better. You’re the only person responsible for this process — or capable of doing it.

Written in the Planets
If you could combine excitement with stability — and expect good results — where would you apply that in your life? A trine between retrograde Saturn in Sagittarius and Uranus in Aries suggests that something to do with your spiritual understanding of yourself might be one area to consider. What unanticipated ‘first’ is ripe to occur in a primary structure of your life? While you explore that, notice what your relationships are showing you. Is anything coming to a peak or a confrontation? Venus in Aries opposes Jupiter in Libra today. Throwing money, food or booze at the situation is not likely to help you come to a long-term resolution; make the pleasure you seek the kind that’s going feel good inside for the foreseeable future. That’s real luck.