Today’s Full Moon in Sagittarius (opposite the Gemini Sun) could feel like it has moved something along at a faster pace than what you’re used to or expected. Yet it’s also likely to provide information you can use. What form that comes in will depend on your personal circumstances.

“When I felt rather overcome with my father’s opposition, I said as firmly as I could, that I must have this or something else, that I could not live without some real work.”
— Elizabeth Garrett Anderson

Full Moon Door (or The Laws of Chaos) 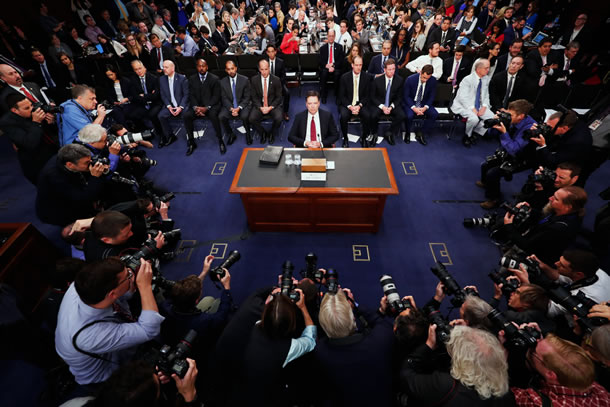 James Comey, former director of the FBI, testifying before the Senate Intelligence Committee on Thursday morning. He explained how he was pressured by Trump to drop the investigation into the Russians meddling in the 2016 election. Photo by Doug Mills / The New York Times.

Before I touch on Friday’s Sagittarius Full Moon or today’s testimony by James Comey, I want to review one issue.

Donald Trump is currently president of the United States, and he didn’t win the election. He got 2,864,974 fewer votes than Hillary Clinton. Many presidents have won by a far smaller margin of victory, most notably John F. Kennedy, who beat Richard Nixon by just 112,827 votes — a margin of just 0.17%. 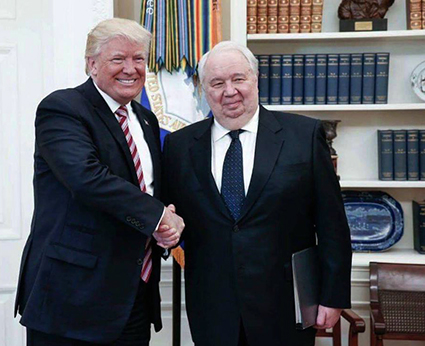 Donald Trump meeting with Sergey Kislyak, the Russian foreign minister, while James Comey was being fired. This photo was taken by TASS, the Russian (formerly Soviet) news agency. No members of the White House press pool (i.e. American reporters) were allowed into the room.

This is the simple truth. Trump lost the election, and won this weird thing called the “electoral vote.” I am aware that the Electoral College is in the federal constitution. So too is the idea that a black person is three-fifths of a person.

The actual issue of Trump losing the election but still taking office is not about the law; it’s not about politics; it’s a moral issue. The last time someone lost the “popular vote,” which means the vote, we got George W. Bush, Dick Cheney, and a series of disastrous wars that have yet to end.

We got the Sept. 11 incident, which the administration knew was about to happen. We got the PATRIOT Act. We got torture and “extraordinary rendition.” We got uncontrolled surveillance of our telephones and internet accounts.

Someone losing the election and taking office is more than a bad omen. The person holding office has no moral allegiance to the country or to its people. Why would they?

They can satisfy themselves with the idea that their “victory” was constitutional, and technically lawful. That’s not the same as knowing that a majority of the people support you, under a system of government where the majority opinion is the one our elections are supposed to be based on.

If Your Birthday is June 9
(The Day of Mental Insistence) | Gemini Birthday Reading | All Other Signs
Take a serious approach to your business partnerships and you will be rewarded with mature accomplishments. In any relationship where business is mixed with personal interests, business must come first and foremost, if you want the relationship to last.

Written in the Planets
Today’s Full Moon in Sagittarius (opposite the Gemini Sun) could feel like it has moved something along at a faster pace than what you’re used to or expected. Yet it’s also likely to provide information you can use. Whether that comes in the form of literal data, a conversation, some level of felt or intuited insight, reassurance, a challenge, a fresh look at reality, a full-on confrontation, or some other surge of energy, will depend on your personal circumstances. A quick inventory of what’s confirmed to be real versus what’s just an idea or a wish could help. Venus and Mars in harmony get feelings and actions working together; put that energy to good, friendly use.