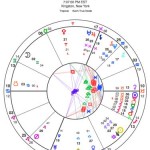 On the eve of the conversation I describe below, Chronogram magazine, for which I’ve written the horoscope since 1995, held a party in Rhinebeck. Outside the party, I spoke for a moment with Jason Stern, my friend of many years and then-publisher of Chronogram. I said, seemingly out of nowhere, that one of the blights on my conscience was not being able to shut down the dioxin contaminated dorms at SUNY New Paltz.

On the eve of the conversation I describe below, Chronogram magazine, for which I’ve written the horoscope since 1995, held a party in Rhinebeck. Outside the party, I spoke for a moment with Jason Stern, my friend of many years and then-publisher of Chronogram. I said, seemingly out of nowhere, that one of the blights on my conscience was not being able to shut down the dioxin contaminated dorms at SUNY New Paltz. You can read about that incident on this website. The developments in this article happened the next day.

I just had the most interesting conversation of my journalism career since Dec. 29, 1991; in truth one of the most interesting conversations of my life. That was the day that the PCB transformers exploded at SUNY New Paltz — a small state college campus in upstate New York. This is a story that some of my longer term readers may be familiar with. In case you’re not, here is a summary that I wrote in 2007. The dorms I am describing, Bliss, Capen, Gage and Scudder halls, house about 1,300 students a year, nearly all of them freshmen and sophomores. 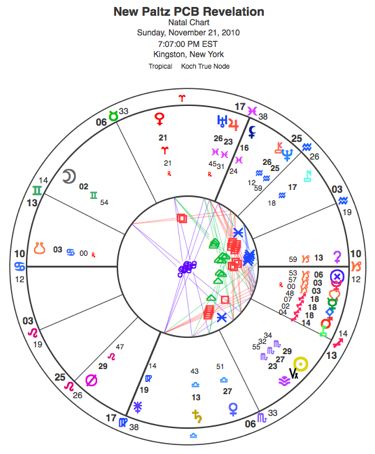 Hoarary chart for the conversation.

I have to protect my source, but I can tell you what I learned. He is someone who was involved on a high level in state government at the time, whose name I knew, and who based on his own conscience took action. I hadn’t heard about this whole scenario till tonight.

The botched PCB and dioxin “cleanup” of six buildings cost somewhere around $100 million. When that much money changes hands, he said, the mob is always involved, on many levels. This is why the coverup went across clear party lines. It’s why The New York Times (despite doing two short pieces on me personally) never actually dug into the story. It’s why Gov. Mario Cuomo stayed away.

He said that there was an employee in the state Office of General Services (OGS), the lead agency — which I have rarely mentioned in my coverage, but whose documents I tracked for years. Think of OGS as “the state itself” rather than one of its functionary parts. This person served as an “angel” who would sign off on anything, for kickbacks. At certain points the known cost of the cleanup was approaching a million dollars a month, and he would approve any bill. The Internet was crude at the time (mid-1990s) but there were many emails exchanged that documented every move they made. I asked why they were so brazen about it, particularly during my peak of work on the issue — I was on it around the clock for years, at that point.

“They just didn’t think they were going to get caught,” he said.

There was someone else in OGS who knew what was happening and who for spiritual reasons could not live with himself, so he blew the whistle within the system. (I had long considered that at some point this had to weigh on someone’s conscience enough to get them to take action.) His revelation included revealing, with proof, how the lead contractor, Clean Harbors, Inc., was cooking the books both on the finances and the toxins levels. As the millions went flying by, kickbacks were given to all the appropriate places. While this was happening, I was tracking every move of these contractors and could not explain how their decisions violated all common sense, science, or established past precedent for indoor PCB and dioxin cleanups.

The whistle blower turned a huge file over to my source. Gov. George Pataki was brought in; the guy signing off on everything was called on the carpet and he denied everything — until the box of emails was put in front of him. “He turned white,” my source said. He was stripped of his pension, agreed to leave state government and was out of the picture; as part of the deal he was not prosecuted. Pataki got the file and promised to remedy the issues and then ever did anything. My source said he sought immunity for the whistleblower but was unable to get it.

My source said that at the time he was concerned about my personal safety, the preservation of which at the time I credited to Jesus, to being friends with a lot of very good lawyers, being extremely visible (as a safety maneuver on my part) and as of tonight to being a full-blooded Sicilian. His theory was, they knew I was never going to get anywhere so they left me alone.

This was not merely a kickback scheme. He said it was so enormous it was incomprehensible. He believes that the scandal reached into the environmental movement which — with the notable exception of the Sierra Club, which published a major investigative feature focusing on GE and Monsanto — did nothing significant to help the situation out, and would not get involved. This always confounded me.

I learned all of this and many other details in the space of an hour. My time for the chart is 7:07 pm. Unusual things happen when the Sun is void of course. Just last night at a company party for one of the magazines I’ve written for, I was talking to my publisher and friend Jason Stern, describing how this was one of the deepest unresolved chapters in my life — because I never succeeded in shutting the buildings down or getting a real cleanup. He understood — and so did the person who explained this to me tonight — someone I knew of, and understand his position in government and his motives — but did not figure out who he was until tonight. And when I told him who I was, that is, the guy who wrote all those articles, he told me the story.

He explained in simple terms that the reason I didn’t get as far as I wanted and rightfully should have was because I was playing against the biggest boys in the game. He said he got out because he realized it would be “hazardous for his health” to be involved. He really believed that if he went forward, he was risking his life.

He and many other people knew about me, he said, and he assured me that I was hated in state government and by all these people involved in the scam, which is a point of pride for an investigative reporter.

Once the issue was exposed, they chose not to go to the press; had they, I would have had another level of the story — the whole story, and quite potentially a new problem in my hands. Because, just like I decided on the first day, there was no way I was going to shut up.

A cosmic moment — a moment of liberation. This does not solve the issue; it doesn’t get the students to a safe place; but it explains what I was up against for all these years, and how this issue got buried. Now, for a look at that chart.