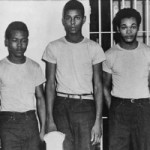 Florida lawmakers have apologized for what happened to four young African-American men in Groveland, Florida, nearly 70 years ago in 1949. The men, known as the Groveland Four, were falsely accused of raping a 17-year-old white girl. Before going to trial, one of the four men, Ernest Thomas, was murdered.

Fla. Lawmakers Apologize to Family of “Groveland Four,” Black Men Falsely Accused of Rape in 1949
Florida lawmakers have apologized for what happened to four young African-American men in Groveland, Florida, nearly 70 years ago in 1949. The men, known as the Groveland Four, were falsely accused of raping a 17-year-old white girl. Before going to trial, one of the four men, Ernest Thomas, was hunted down and murdered by a mob of 1,000 men led by the local sheriff, Willis McCall. He was killed in a hail of gunfire. The other three men were tortured in jail until two of them gave false confessions. Charles Greenlee was sentenced to life. Walter Irvin and Samuel Shepherd were condemned to death. Just recently, Florida lawmakers passed a resolution saying, “We’re truly sorry.”

Marissa Alexander, Jailed for 3 Years, Speaks Out on Intimate Partner Violence & Building Movements
We turn now to the case of Marissa Alexander, the African-American mother of three who was sentenced to 20 years in prison for firing what she maintains was a warning shot at her abusive husband in 2010. She attempted to use Florida’s “stand your ground” law in her defense—the law that was made famous when white vigilante George Zimmerman successfully used it as his defense after he shot and killed unarmed African-American teenager Trayvon Martin. But in March 2012, the jury rejected Alexander’s use of “stand your ground” and convicted her after only 12 minutes of deliberation. She was sentenced to 20 years behind bars under a Florida law known as “10-20-Life” that carries a mandatory minimum for certain gun crimes regardless of the circumstance. Alexander won an appeal for a new trial and later accepted a plea deal that capped her sentence to three years of time served. Earlier this year, she was freed from house arrest after being jailed for three years and serving two years of court-ordered home confinement.

Meet Ammar Mohrat: Syrian Asylee Picked as College Commencement Speaker in Florida
Ammar Mohrat was a political and media activist in Homs, Syria. He fled Syria in 2011 due to political persecution and death threats. Mohrat was granted political asylum in the United States about two years ago. He just graduated from Saint Leo University in Florida with a Bachelor of Science degree in computer information systems. On Saturday, April 29, Mohrat delivered his class’s commencement address.