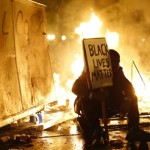 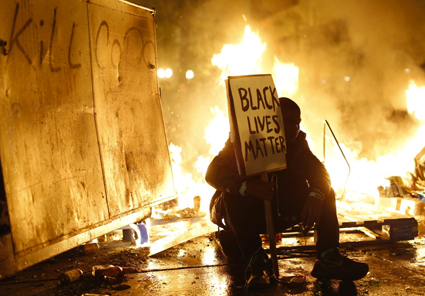 A demonstrator sat in front of a street fire during a protest in Oakland following the grand jury decision in Ferguson. Photo by Stephen Lam.

This is, as we all know, part of a pattern of white police officers killing unarmed black youth with impunity.

Grand juries seem ready to indict just about anyone except a police officer who has killed an unarmed person of color.

As I said in my earlier coverage of this issue, we are talking about the badge being a license to kill. It was never deigned that way, but in effect that’s what it’s become.

At no point did McCulloch state the actual reason that police officer Darren Wilson believed that his life, or someone else’s life, was threatened, therefore giving him legitimate reason to fire his weapon. And incredibly, no journalist who later questioned him asked about that issue. If there’s an elephant in the room, this is the one. We all agree that police officers and even civilians have the right to use deadly force — if life is threatened.

So in order to determine that Officer Wilson did not commit a crime, we would need to know what his reasoning was. And this was left out of the story, and from what I’ve read from his testimony, he failed to explain it to the grand jury.

McCulloch began his remarks 10 minutes earlier than my chart is cast for, but I figured there would be a long preface. I decided in advance that the chart would be for the actual moment when he revealed the grand jury’s findings. The ten-minute interval did not alter key factors in the chart; it’s just that with each passing minute, the intensity of the chart increased.

For one thing, the Capricorn Moon was working its way toward a conjunction with Pluto, and passed through the Uranus-Pluto square — saying clearly that what is happening around this case is a sign of the times.

Meanwhile, Uranus, the planet of revolution, was rising higher in the sky and was about to reach the 10th house cusp (in this case, also known as the midheaven), the line that tells us about the government. My key phrase for the 10th cusp is “all the way to the top.”

The sign involved is Aries, which is assertive, forward thinking and at times can represent aggression. There are now two crucial planets in Aries at the moment, Uranus and Eris, both of them high in the sky, occupying the 10th house. Their presence so close to the midheaven describes at least two possibilities. They might seem to contradict, but really they could both exist at the same time.

One is a rogue government, totally out of control. Uranus is one of those planets that’s capable of anything, famous for its unpredictability.

If you’re wondering how something so predictable is associated with a factor that says unpredictable, note that the South Node is in the 10th as well. This is part of an old pattern, now fully come into manifestation. Anyone familiar with American history recognizes that pattern as institutional racism that, in the current style, extends back to the early Jim Crow period just after the Civil War ended.

The second way to read this is revolt against the government; it’s something that the government will experience and in truth is experiencing. There is anger, militancy and a self-centered quality of Uranus in Aries on the MC, and that could be difficult for authorities to keep a grip on.

Last night within hours of the announcement, there were protests on both coasts and many places in between. Ferguson erupted in riots, looting and arson. Protesters in New York City blocked bridges and streets.

There’s one more factor in this chart that is in the background, which I described in Monday’s diary: that is Sun square Neptune. The Sun in the chart of a mundane event represents authority. In a way similar to the 10th, it has a regal feeling and can represent a governor, president or king. In a sense it’s the governing authority, as the center of our solar system.

Right now the Sun is approaching an exact 90-degree angle to Neptune. That is slippery. In a personal chart it might be dreamy, creative and prone to escapism; in a mundane chart it warns of deception.

But in the style of Neptune, that deception may be lurking in the background rather than the overt kind. The big lie of this case was using a grand jury process as a criminal trial — something that’s simply wrong.

Most people don’t know that the grand jury’s job is to determine whether a crime may have happened — not to make an ultimate finding of fact and law. The grand jury does not convict or acquit. That is up to the trial jury. What McCulloch did was reverse the process. He turned the grand jury presentment into the trial, and in the process “acquitted” police officer Darren Wilson — by making sure he was not even charged.

The problem with Sun-Neptune, for the government, is that it indicates a very low potential for the people involved to keep a grip on things. They are vulnerable and they know it. No matter how much bravado and audacity are displayed by police and government authorities, they are afraid of the people, who outnumber them, and who they well know may be armed.

There is too much to get into in a short letter — I will take up this topic as the first order of business on Planet Waves FM, which I plan to have posted tonight by 5 pm EST. I’ll also begin my coverage of the top five events of 2015. My musical guests are Suzanne Vega and Jane’s Addiction performing the work of the Grateful Dead.

Note, we have an edition of Planet Waves ready, and we will distribute it at the regular time Thursday evening, followed by a reminder Friday morning in case you missed that mailing due to the holiday in the United States.

See you over at Planet Waves FM.