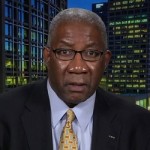 Arkansas executed four men in April, marking the first executions there since 2005. Arkansas had initially planned to execute eight men over 11 days, but several executions were blocked by the courts. One of the judges involved, Wendell Griffen, is now facing calls to be impeached, after taking part in an anti death penalty protest.

Neoliberal Investment Banker Macron Defeats Openly Xenophobic & Racist Le Pen in French Election
Former investment banker and political centrist Emmanuel Macron has been elected president of France in a landslide victory over far-right candidate Marine Le Pen. Macron won over 66 percent of the vote. Even though Le Pen lost, she received nearly 7 million votes—more than any other candidate in the history of her party, the anti-immigrant National Front. Le Pen had campaigned on an openly xenophobic and racist platform, calling for France to crack down on immigration and leave the European Union. Macron ran on a pro-trade and EU agenda. French human rights and civil liberties activist and researcher, Yasser Louati, recently wrote an article titled “French Elections: Marine Le Pen or Emmanuel Macron? Hitler or UBER?”

Puerto Rico’s Financial Future Now in the Hands of a Single Judge Overseeing Massive Bankruptcy
Puerto Rico has announced plans to close 179 public schools just days after filing for a form of bankruptcy protection, seeking to restructure $123 billion in debt and pension obligations, in the largest local government insolvency in U.S. history. The move is likely to slash money for healthcare, pensions and infrastructure. The territory petitioned for relief under Title III of the PROMESA law, which recognizes that Puerto Rico is not part of any state and must in some ways be treated as sovereign. Puerto Rico is legally barred from using Chapter 9, the bankruptcy route normally taken by insolvent local governments.

Exclusive: Meet the Arkansas Judge Who Faces Impeachment for Protesting Against the Death Penalty
Arkansas executed four men in April, marking the first executions there since 2005. Arkansas had initially planned to execute eight men over 11 days during the month of April, but several of the executions were blocked by the courts. One of the judges who blocked the state’s efforts is now facing calls to be impeached. On April 14, state Judge Wendell Griffen issued a temporary restraining order that effectively halted six of the executions over concerns the state used false pretenses to obtain a key drug slated to be used in the executions. Following his ruling, Judge Griffen took part in an anti-death penalty protest outside the Governor’s Mansion organized by his church to mark Good Friday. In addition to being a judge, Griffen is an ordained Baptist minister. Calls for Wendell Griffen’s impeachment began soon after photographs from the vigil appeared in the press showing him lying down on a cot with his hands bound together as though he were a condemned man on a gurney. In his first national television interview, Wendell Griffen speaks to Democracy Now!

Web Exclusive | Rutgers Student Activist & “DREAMer” Speaks Out While Facing Possible Deportation
One of the most prominent undocumented students at Rutgers University in New Jersey is facing possible deportation this week. Carimer Andujar, the president of UndocuRutgers, has been summoned by Immigration and Customs Enforcement for an interview on Tuesday. Andujar, 21, came to the United States from the Dominican Republic with her family at the age of four. She is also a recipient of DACA—Deferred Action for Childhood Arrivals—under President Obama.