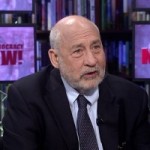 Economist Joseph Stiglitz: Trump’s Budget Takes a Sledgehammer to What Remains of the American Dream
The Trump administration unveiled its $4.1 trillion budget Tuesday. The plan includes massive cuts to social programs, while calling for historic increases in military spending. The budget proposes slashing $800 billion from Medicaid, nearly $200 billion from nutritional assistance programs, such as food stamps and Meals on Wheels, and more than $72 billion from disability benefits. The plan would also completely eliminate some student loan programs. It would ban undocumented immigrants from receiving support through some programs for families with children, including the child care tax credit. The budget also calls for an historic 10 percent increase in military spending and another $2.6 billion to further militarize the U.S.-Mexico border, including $1.6 billion to build Trump’s border wall.

Rep. Al Green to Draft Articles of Impeachment Against Trump, Citing Obstruction of Justice
As controversy continues to swirl around the investigation into whether the Trump campaign colluded with Russian officials ahead of the 2016 election, we speak to Democratic Congressmember Al Green of Texas. Last week he became the first congressmember to call for Trump’s impeachment from the floor of the House of Representatives.

Texas Rep. Al Green Faces Threats of Lynching & Murder After Calling for Trump’s Impeachment
Last week, Texas Democratic Congressmember Al Green became the first congressmember to call for President Trump’s impeachment from the floor of the House of Representatives. Since then, the African-American lawmaker has received a barrage of racist threats, including voicemails in which callers threaten to lynch him.

More Than 1.1 Million Sign Petition Supporting Impeachment of Trump
On Tuesday, former CIA Director John Brennan testified to the House Intelligence Committee that he had growing concerns last year that Trump’s campaign may be colluding with Russian officials to influence the 2016 election—and that the Russians might lead Trump officials down a “treasonous path.” Trump has now hired a lawyer to represent him in the ongoing investigation, which has sparked mounting calls for Trump’s impeachment.

Tariq Ali: Manchester Bombing is Part of Vicious Cycle, Likely Blowback from Ongoing War on Terror
In Britain, nearly 4,000 soldiers have been deployed to support local police departments in the wake of a suicide bombing that killed 22 people and injured dozens at a concert on Monday night. The victims were mostly young girls and parents who had taken their daughters to the concert by American pop star Ariana Grande. Authorities have identified the bombing suspect as Salman Abedi, a 22-year-old British man whose parents emigrated from Libya. ISIS has claimed responsibility for the attack.