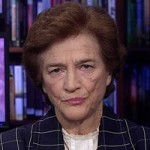 Fallout continues to grow over Donald Trump’s firing of FBI Director James Comey last week. The firing came just days after Comey requested more resources to probe Russia’s meddling in the 2016 election. Senate Democrats are now threatening to refuse to vote on a new FBI director unless a special prosecutor is named to investigate possible ties between the Trump campaign and Russia.

Donald Trump is Deep into Watergate Territory Now: Former Congresswoman Who Probed Nixon Speaks Out
Fallout continues to grow over Donald Trump’s firing of FBI Director James Comey last week. The firing came just days after Comey requested more resources to probe Russia’s meddling in the 2016 election. Senate Democrats are now threatening to refuse to vote on a new FBI director unless a special prosecutor is named to investigate possible ties between the Trump campaign and Russia. Meanwhile, pressure is growing on the administration to reveal whether Trump has been secretly recording conversations at the White House. On Friday, Trump tweeted, “James Comey better hope that there are no ‘tapes’ of our conversations before he starts leaking to the press!” Trump’s possible recording of White House conversations has led many comparisons between Trump and former President Richard Nixon, who resigned on August 8, 1974—three days after the release of an audio recording of Nixon discussing the Watergate break-in. Nixon had fought off congressional subpoenas to release the tape, but eventually the Supreme Court forced him to hand it over. It later became known as the smoking gun tape.

Neuroscientist Carl Hart: We Need to Stop Jeff Sessions from Escalating the Racist War on Drugs
In an escalation of the war on drugs, Attorney General Jeff Sessions has rescinded two Obama-era memos that encouraged prosecutors to avoid seeking inordinately harsh sentences for low-level drug offenses. He also instructed Justice Department prosecutors to pursue “the most serious” charges for all drug offenses. Former Attorney General Eric Holder condemned the move, saying, “The policy announced today is not tough on crime. It is dumb on crime.” Under the Obama administration guidelines, the number of drug offenders given mandatory minimum sentences plummeted, contributing to a 14 percent decline in the total federal prison population.

Columbia Neuroscientist Receives Death Threats for Speaking Out Against Deadly Philippines Drug War
Trump recently invited Philippines President Rodrigo Duterte to visit the White House, despite criticism from human rights groups over Duterte’s so-called war on drugs, during which thousands of people have been extrajudicially killed by police and vigilantes. Neuroscientist Carl Hart recently attended a drug conference in Manila. He had to leave the Philippines after his life was threatened.

Son of Hunger-Striking Palestinian Leader Marwan Barghouti: I Haven’t Touched My Father in 15 Years
It has been almost a month since over 1,500 Palestinian prisoners have been on hunger strike inside Israeli jails. The strike, which began on April 17, was called by Marwan Barghouti to protest poor living conditions in prison and the administrative detention law, which allows Palestinians to be held without charge. Barghouti is the most high-profile Palestinian in Israeli detention. Some have described him as the “Palestinian Nelson Mandela.” In a New York Times op-ed announcing the strike last month, Barghouti wrote, “Having spent the last 15 years in an Israeli prison, I have been both a witness to and a victim of Israel’s illegal system of mass arbitrary arrests and ill-treatment of Palestinian prisoners. After exhausting all other options, I decided there was no choice but to resist these abuses by going on a hunger strike.” His son Arab Barghouthi recently launched the “saltwater challenge,” asking supporters to express their solidarity with the hunger strikers by posting videos online drinking saltwater.