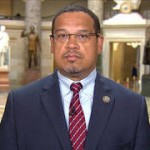 Voters in several states Tuesday determined a number of key primaries, and it was another big night for female Democrats. In Georgia, Stacey Abrams made history by becoming the first African-American woman to win a major party’s nomination for governor.

DNC Deputy Chair Keith Ellison: The Democratic Party Should Stay Out of Primaries, Let Voters Decide
Voters in Georgia, Texas, Arkansas and Kentucky headed to the polls Tuesday to determine a number of key primaries, and it was another big night for female Democratic candidates. In Georgia, Stacey Abrams made history by becoming the first African-American woman to win a major party’s nomination for governor in the U.S. If Abrams wins in November, she will become the first African-American governor in the Deep South since Reconstruction. Meanwhile in Houston, Texas, Lupe Valdez made history by becoming the first openly gay and first Latina candidate to win a major-party nomination for Texas governor.

“We Are Lurching Toward Plutocracy”: Rep. Ellison on Rollback of Key Dodd-Frank Banking Regulations
In a rare bipartisan effort Tuesday, House lawmakers voted 258 to 159 to exempt banks with less than $250 billion in assets from many of the 2010 Dodd-Frank Act regulations, even though banks’ profits are soaring. The Dodd-Frank Act was passed after the 2008 economic crisis, which was provoked by years of risky lending by Wall Street banks. Thirty-three Democrats joined their Republican counterparts in voting for the financial regulation rollback, which, if signed into law, would leave less than 10 banks in the U.S. subject to stricter federal oversight.

Supreme Court Deals Blow to Workers’ Rights in 5-4 Decision Against Collective Action
In a major blow to workers’ rights, the Supreme Court ruled 5 to 4 Monday that employers can use arbitration clauses to prohibit workers from banding together to challenge violations of federal labor laws in class-action lawsuits. Arbitration is often confidential. Many workers may agree to mandatory arbitration clauses without even being aware of it when they sign a contract with their employer. In a rare show of public displeasure, Justice Ruth Bader Ginsburg read her dissent from the bench, calling the majority opinion “egregiously wrong” and saying, “The court today holds enforceable these arm-twisted, take-it-or-leave-it contracts—including the provisions requiring employees to litigate wage and hours claims only one-by-one. Federal labor law does not countenance such isolation of employees.”

The New COINTELPRO? Meet the Black Activist Jailed for Months After FBI Targeting & Surveillance
In Texas, a black activist says he is the first person to be targeted and prosecuted under a secretive U.S. surveillance effort to track so-called black identity extremists. On December 12, activist Rakem Balogun awoke to armed FBI agents storming his Dallas apartment. He was then jailed for nearly six months without the possibility of bail as the FBI investigated him for “domestic terrorism,” in part because of his Facebook posts criticizing police brutality. He was released earlier this month, after U.S. attorneys failed to prosecute him.