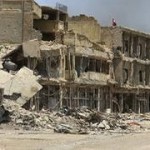 Iraq’s nine-month-long battle to retake Mosul from the self-proclaimed Islamic State is coming to an end, but the humanitarian crisis is not. According to the United Nations, almost 700,000 residents are still displaced — nearly half living in emergency camps.

Devastation in Mosul: Iraq Seizes City from ISIS, But Battle Left Thousands Dead & 700,000 Displaced
Iraq’s nine-month-long battle to retake Mosul from the self-proclaimed Islamic State is coming to an end, but the humanitarian crisis is not. According to the United Nations, almost 700,000 residents are still displaced — nearly half living in emergency camps. Airwars is estimating between 900 and 1,200 civilians were likely killed by coalition air and artillery strikes during the assault on Mosul, but the overall death toll is significantly higher. The International Red Cross reports seeing a tremendous increase in civilian casualties in recent weeks. Azmat Khan is an award-winning investigative journalist and a Future of War fellow at New America. She has spent the last year and a half investigating how the U.S.-led war against ISIS is playing out on the ground in Iraq.

Even as All G20 Countries Except U.S. Affirm Paris Deal, Nations Pour $72B a Year into Fossil Fuels
On Saturday, world leaders broke with the United States on climate change and reaffirmed their commitment to the Paris climate agreement, which they called “irreversible.” The final joint statement from the G20 summit in Hamburg, Germany, took the unusual step of acknowledging the U.S. rejection of the Paris deal while reiterating the rest of the world’s support for the landmark climate agreement. Meanwhile, a group of environmental organizations have released a new report claiming G20 governments provide an average of $72 billion per year in public finance for fossil fuels—nearly four times as much as they provide for clean energy. The report is titled “Talk is Cheap: How G20 Governments Are Financing Climate Disaster.”

Award-Winning Journalist Amy Wilentz on Just How Little Jared Kushner Knows About Foreign Politics
Donald Trump’s son-in-law and senior adviser Jared Kushner is, along with Trump’s son Donald Trump Jr., at the center of a shocking New York Times story published Sunday. According to the article, Kushner, Trump Jr. and then-campaign chair Paul Manafort met with a Kremlin-linked lawyer during the 2016 campaign after being promised damaging information about Hillary Clinton at Trump Tower two weeks after Trump won the Republican nomination. Kushner is one of Trump’s senior advisers who has assumed a major diplomatic role in the administration, despite having no previous diplomatic experience.