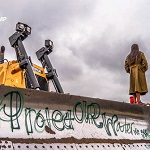 A federal judge has ruled that construction on sacred tribal burial sites in the path of the Dakota Access pipeline can continue. Yesterday, U.S. District Judge James Boasberg issued a temporary restraining order that halts construction between Route 1806 and Lake Oahe, but does not protect the land where, on Saturday, hundreds of Native Americans stopped Dakota Access. 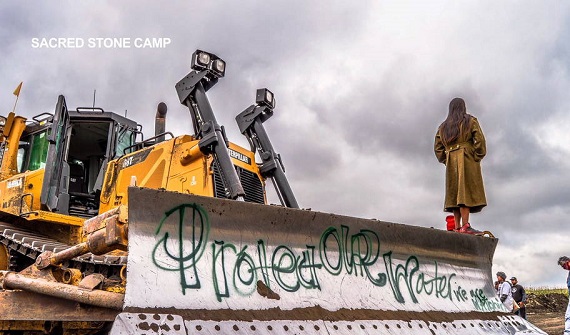 In Washington, D.C., a federal judge has ruled that construction on sacred tribal burial sites in the path of the $3.8 billion Dakota Access pipeline can continue. Yesterday, U.S. District Judge James Boasberg issued a temporary restraining order that halts construction only between Route 1806 and Lake Oahe, but still allows construction to continue west of this area. The ruling does not protect the land where, on Saturday, hundreds of Native Americans forced Dakota Access to halt construction, despite the company’s security forces attacking the crowd with dogs and pepper spray. This part of the construction site is a sacred tribal burial ground. There’s an update from Stephanie Tsosie, associate attorney with Earthjustice who helps represent the Standing Rock Sioux Tribe in its lawsuit against the Army Corps of Engineers over the Dakota Access pipeline.

As a temporary restraining order that halts construction on part of the Dakota Access pipeline was issued Tuesday, about 100 people again shut down construction on another part of the pipeline by obstructing equipment. Some of them locked themselves to the heavy machinery. Native Americans from across the U.S. and Canada continue to arrive at the resistance camps. The Dakota Access pipeline is also facing legal resistance in Iowa, one of four states through which it passes.

In an exclusive interview, a woman held for nine months with her four-year-old daughter at the Berks County Residential Center in Pennsylvania as they seek asylum from El Salvador joins the show. She describes how she won their release only after she bowed to pressure to break her hunger strike and eat an apple. She agreed to do an interview if we did not show her face or use her real name. “Maria” had just arrived in Arlington, Texas. She must now wear an electronic monitor around her ankle.

How long is too long for a child to be held in detention? At least five families have been held for a full year in the Berks Residential Center in Pennsylvania while their asylum case is appealed, even though they could be released to live with immediate family members and relatives in the United States. Amy and Juan discuss the impact of indefinite detention of asylum-seeking women and children with Bridget Cambria, an immigration lawyer who represents many of the families detained at the Berks County Residential Center, and with Dr. Allen Keller, who is an expert in the evaluation and treatment of detained immigrants and asylum seekers. Dr. Keller visited Berks in August to observe the families there. He is Director of the Bellevue/NYU Program for Survivors of Torture, and an Associate Professor at the NYU School of Medicine.

Central American mothers began a sit-in at the office of Sen. Tim Kaine to protest the treatment of other women and children at the Berks County Residential Center. They want the Democratic vice-presidential candidate and other senators to write personal bills that could allow the families to live with relatives in the United States while their cases are pending. Dr. Allen Keller, an expert in the evaluation and treatment of detained immigrants and asylum seekers, said he was disturbed by what he saw when he visited the Berks County Residential Center in August where women and children are on hunger strike to protest their prolonged detention.