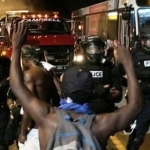 Today, there’s a roundtable on police killings of black men, including Keith Lamont Scott and Terence Crutcher. Protests escalated in Charlotte, North Carolina, overnight when hundreds took to the street and blocked Interstate 85. Here is a petition calling for justice for Terence Crutcher. 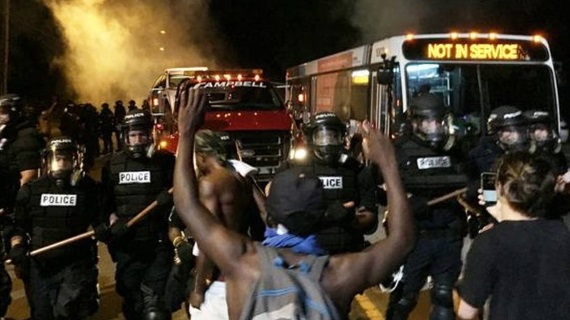 Today, there’s a roundtable on police killings of black men. Protests escalated in Charlotte, North Carolina, overnight when hundreds took to the street and blocked Interstate 85 to express outrage over the police shooting of 43-year-old African American Keith Lamont Scott on Tuesday. Video footage shows people blocking the highway, where fires were lit. This comes as police in Tulsa, Oklahoma, have released a video showing a white police officer shooting and killing 40-year-old African American Terence Crutcher while his hands were in the air. Amy and Juan are joined by Vincent Warren, executive director of the Center for Constitutional Rights; Bree Newsome, artist and activist from Charlotte who scaled the 30-foot flagpole on the South Carolina state Capitol and unhooked the Confederate flag last year; and Rashad Robinson, executive director of Color of Change. He has launched a new petition called “Terence Crutcher died for being Black. Indict Officer Betty Shelby.”