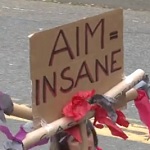 In today’s action-packed show, the team reports on leaked transcripts that reveal the impeachment of Brazil’s President Dilma Rousseff is the result of a plot by members of the interim government. Also, two issues local to New York get an update: the Verizon strike, now in its sixth week, and the continued campaign to stop the expansion of the Spectra AIM pipeline. Definitely not to be missed. 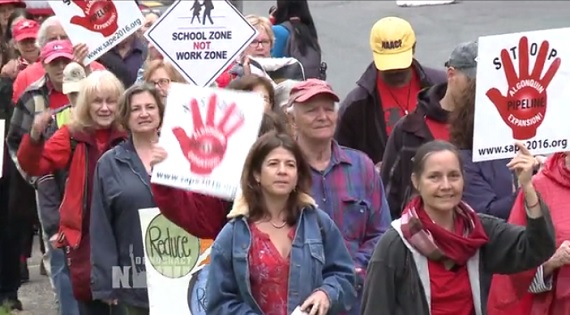 A key figure in Brazil’s interim government has resigned after explosive new transcripts revealed how he plotted to oust President Dilma Rousseff in order to end a corruption investigation that was targeting him. The transcripts, published by Brazil’s largest newspaper, Folha de São Paulo, document a conversation in March, just weeks before Brazil’s lower house voted in favor of impeaching President Rousseff.

Romero Jucá, who was then a senator but became a planning minister after Rousseff’s ouster, was speaking with a former oil executive, Sérgio Machado. Both men had been targets of the so-called Car Wash investigation over money laundering and corruption at the state-controlled oil firm Petrobras.

In the conversation, the men agree that ousting President Rousseff would be the only way to end the corruption probe. In the transcript, Jucá said, “We have to change the government so the bleeding is stopped.” Machado then reportedly said, “The easiest solution is to put Michel in”—a reference to Vice President Michel Temer, who took power once Rousseff was suspended. Maria Luisa Mendonça, director of Brazil’s Network for Social Justice and Human Rights, spoke to Amy and Juan:

AMY GOODMAN: Can you explain what’s happening and the significance of these audiotapes?

MARIA LUISA MENDONÇA: Yes. They actually see and prove very clearly something we have been saying from the beginning, that this is a coup, because there is no reason, no legal basis, for the impeachment of President Dilma, that the main reason to do this was to actually stop investigations of corruption. And it was clear from the beginning, because the interim president, Michel Temer, appointed seven ministers that are now facing charges of corruption. And also one of the first things he did was to eliminate the Controladoria-Geral da União, which is a state agency that controls contracts between the government and private businesses. So it was clear that it was a way to stop investigations of corruption. And then, the second main reason was to implement austerity measures in the right-wing agenda that has been rejected by Brazilian society since 2002. So, the right-wing forces have not been able to win elections. The only way for them to take power was by orchestrating the coup.

JUAN GONZÁLEZ: And could you talk, as well, about his elimination of all these other ministers that deal with social issues within the—within the government?

MARIA LUISA MENDONÇA: Yes, exactly. Just a few hours after taking power, he eliminated the Ministries of Women, of Agricultural Development, of Human Rights and Racial Equality, of Culture, of Communications. So, it was a huge structural change, with very serious consequences. And for instance, the Ministry of Culture is an institution that promotes Brazilian culture all over the world. So you cannot justify that by any argument, even economics. It doesn’t make any sense. Since then, there have been huge demonstrations. Just over the weekend, this past weekend, several office buildings have been occupied by artists. At least in 20 states, the offices of the Ministry of Culture are now occupied. And we have seen huge concerts with demonstrations against Michel Temer. And even in stadiums, in soccer stadiums, we are seeing demonstrations all over the country. So it’s very clear that this agenda will be rejected.

Also, for instance, in the case of the Ministry of Women, there now is a secretary. It lost its status as a ministry. Michel Temer invited five women, academics and artists, that rejected the invitation. So I think it’s actually interesting to see that no woman wants to be part of the new government, which is a positive sign considering what this government looks like. And just yesterday, finally, he found someone for that position, and it’s a former congresswoman who is herself being accused of corruption.

In the case of the communications, the public communications system is actually very concerning. Just a few hours after taking power, Temer fired the head of the public broadcasting system in Brazil and replaced him with an executive from TV Globo, the very powerful network that is calling for demonstrations against the government for over a year right now. So, that is a huge change. Imagine if suddenly the head of NPR was replaced by a Fox News executive. That’s a comparison that we can make. So he eliminated several very important public institutions.

JUAN GONZÁLEZ: And you mentioned Globo. What has been the role of the mass media, of the commercial media, as all these events have been unfolding?

MARIA LUISA MENDONÇA: Yeah, that is a key role. What we—I have been saying that—imagine if here in the U.S. all TV stations were like Fox News, and they all started to call for demonstrations against the government and were broadcasting those demonstrations live all day long, and at the same time the large demonstrations in support of the government, in support for democracy in Brazil, were mainly ignored. So, I think it’s very important for people to understand that this was created—this idea of that the main problem in Brazil was corruption was pretty much created by corporate media, and now it’s very clear that, with the recent release of this transcript, that the main goal was to actually stop the investigations of corruption and to implement an agenda, a neoliberal agenda, that not only cut important social programs, but changes legislation, as you were mentioning in the beginning of the show.

For instance, in the case of the spending, governmental spending, for education, right after the end of the military dictatorship in Brazil, the new constitution determined that in local and state administrations, 25 percent of the budget is the minimum that has to be applied, invested on education, and the same as the federal—in the federal level. That is, a minimum of 18 percent. And Michel Temer now is proposing to change legislation so the state is not obligated to spend a minimum on education, which will have a huge impact. This is not going to improve the economy. This will create more economic inequality and more instability.

Today marks six weeks since Verizon workers walked out over contract changes and the company’s refusal to extend high-quality broadband as promised to customers. Striking worker Pamela Galpern explained about the broadband issue.

JUAN GONZÁLEZ: Pam, I wanted to ask you about this—the issue of FiOS, because obviously it’s one of the best broadband networks, if not the best, in the country. But in many places where FiOS was established as a cable and internet service, Verizon made certain promises that it would roll out FiOS to its—to the public. In New York City, they’re years behind what they were supposedly going to do as part of a cable franchise they got during the Bloomberg era. Could you talk about this and why it’s taken the company so long to actually fulfill the promises it made when it won that franchise?

PAMELA GALPERN: Sure. Well, when Verizon got the franchise agreement from the City of New York in 2008, they agreed that they would make FiOS available to every New Yorker who wants it by 2014. And we have been working hard to build FiOS during that entire time. It’s a huge build. In 2014, the company said, “We’ve completed our obligations to the City of New York. We’ve passed every home.” Now, every Verizon worker and many, many customers know that that’s not true that they could get FiOS. To say that they’ve passed the home doesn’t mean it’s available. So, there is a FiOS build—a lot of FiOS build left to do in New York City. As Bob said, it’s the landline workers who are doing that build. And we want to continue doing it, but Verizon is essentially holding to its position that it’s completed its obligations. To say that you’ve passed a home, but that you’re two blocks away, going down the avenue, and when that customer calls Verizon, and Verizon says, “It’s not available to you, and I can’t tell you when it will be available,” indicates to us that they haven’t completed the build, they haven’t fulfilled their obligations to the City of New York. Beyond New York, of course, there’s whole communities—Syracuse, Buffalo, Albany, lots of other parts of the footprint—where they’re not going to build at all. FiOS is a great product. People want it. We’re building it. It helps preserve good jobs. It’s really a win-win for the company to continue the build, to meet its obligations. And we believe that’s what they should be doing. And what they really need to do is hire more workers in order to complete the build.

Last but not least on today’s show: In Peekskill, New York, just about an hour north of New York City, residents have launched a blockade in efforts to stop the construction of a gas pipeline slated to run only hundreds of feet from the aging Indian Point nuclear power plant. The proposed project has sparked concerns from residents and nuclear experts that a pipeline break could cause a catastrophic nuclear disaster that would threaten the entirety of New York City.

The pipeline is being built by Spectra Energy and is officially known as the Algonquin Incremental Market Project, or AIM pipeline. Well, only hours ago, Peekskill residents and activists escalated the campaign to stop this pipeline’s construction by installing a fully sustainable shipping container at the entrance of Spectra’s work yard—complete with two activists living inside.

For more information on the campaign to stop the pipeline, here is the Resist AIM Pipeline Facebook page; there’s also a #StopSpectra blog.