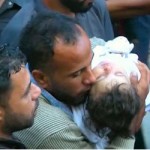 The United States is refusing to criticize Israel after Israeli forces shot dead at least 61 unarmed Palestinian protesters taking part in the Great March of Return in Gaza Monday. More than 2,700 Palestinians were injured. At the United Nations, U.S. Ambassador Nikki Haley has blocked a call for an international investigation into Israel’s actions.

Norman Finkelstein: Outrage over Israeli Massacre Shows Power of Nonviolent Palestinian Resistance
The United States is refusing to criticize Israel after Israeli forces shot dead at least 61 unarmed Palestinian protesters taking part in the Great March of Return in Gaza Monday. More than 2,700 Palestinians were injured. At the United Nations, U.S. Ambassador Nikki Haley has blocked a call for an international investigation into Israel’s actions. On Tuesday, she repeatedly blamed the violence on Hamas while praising Israel for showing restraint. During her remarks, Nikki Haley refused to place any blame on Israel. She later walked out of the Security Council chamber when the Palestinian ambassador to the U.N., Riyad Mansour, addressed the council. Since Palestinian protests began on March 30, Israel forces have killed at least 112 Palestinians and injured more than 12,000. On Tuesday, the chief prosecutor of the International Criminal Court said she was closely following the situation in Gaza and would “take any action warranted” to prosecute crimes. Meanwhile, the United Nations human rights office has condemned the “appalling deadly violence” by Israeli security forces in Gaza.

Norman Finkelstein: Palestinians Have the Right to Break Free of the “Unlivable” Cage That Is Gaza
This spring’s mass nonviolent protests in Gaza come as the human rights conditions in the “open-air prison” have even further deteriorated. Last year, the United Nations issued a report warning Gaza is already “unlivable.” The majority of its water is contaminated, and electricity is limited to only a few hours a day. About half the population is children. Almost all are refugees who are prevented from ever leaving the tiny Gaza Strip, one of the most densely populated places on Earth.

Key Democrats Back Gina Haspel’s Confirmation as CIA Director, Despite Her Record on Torture
The Senate Intelligence Committee approved President Trump’s nominee for CIA director, Gina Haspel, sending her confirmation to the full Senate floor. Haspel is a 33-year CIA veteran who was responsible for running a secret CIA black site in Thailand in 2002 where at least one prisoner was waterboarded and tortured in other ways during her tenure. She also oversaw the destruction of videotapes showing torture at the black site. A number of key Democrats have come out backing Haspel, after she said the CIA torture program should never have existed, even though she repeatedly refused to call the CIA’s post-9/11 treatment of prisoners “torture,” and declined to state whether she believes torture is immoral, during her confirmation hearing last week.

Koch Brothers-Backed Effort to Sabotage Unions Uses Secret “Tool Kit” to Encourage Members to Quit
Internal documents obtained by The Guardian show how a network of right-wing think tanks have launched a nationwide effort to convince members of public sector unions to stop paying dues. The effort is backed by $80 million in funding from billionaires like the Koch brothers, who expect a favorable decision from the Supreme Court this month in a case that could let workers who benefit from union-negotiated contracts avoid paying union dues if they opt not to join the union. The campaign comes as North Carolina teachers staged a massive walkout today, shuttering hundreds of schools, on the heels of major strikes by teacher unions in West Virginia, Kentucky, Oklahoma and Arizona. Ed Pilkington is chief reporter for The Guardian in the U.S. His new report is an exclusive look at “How rightwing groups wield secret ‘toolkit’ to plot against US unions.”