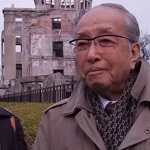 President Obama will become the first serving U.S. president to visit the Japanese city of Hiroshima later this month. But officials said he will not apologize for what happened on August 6, 1945, when the United States dropped the first nuclear weapon in history on the civilian population of Hiroshima. 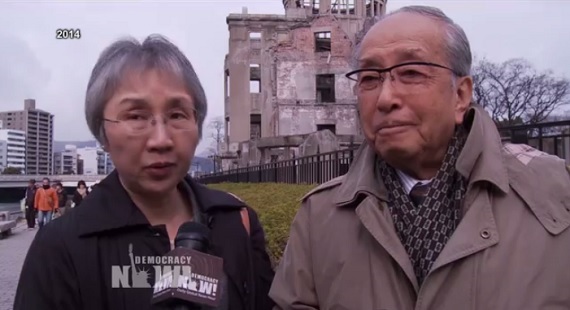 Video still from a Democracy Now! interview in 2014 with Koji Hosokawa (r), a Hiroshima survivor.

The White House has announced President Obama will become the first serving U.S. president to visit the Japanese city of Hiroshima later this month. But officials said he will not apologize for what happened on August 6, 1945, when the United States dropped the first nuclear weapon in history on the civilian population of Hiroshima. The attacks on Hiroshima and Nagasaki killed over 200,000 people and caused widespread destruction.

Despite the administration’s call for the elimination of nuclear weapons, the United States is pursuing a 30-year, $1 trillion program to modernize its nuclear weapon arsenal by designing bombs with smaller payloads. Retired General James Cartwright recently told The New York Times, “what going smaller does is to make the weapon more thinkable.”

This 30-year, $1 trillion cockamamie plan—a colleague of ours called it a “trillion-dollar train wreck“—to totally upgrade all of our nuclear weapons complex, from the research laboratories to new warheads to new missiles, bombers, submarines, I can’t think of a worse misappropriation of our tax dollars. And predictably, every other nuclear-weapon state has followed suit, saying that they are going to upgrade their nuclear weapons, as well. It totally shreds any credibility that the United States has on nonproliferation. So that would be the first thing, is cancel that.

There are a lot of other steps that he could take: taking our nuclear weapons off of hair-trigger alert, separating the warheads from their delivery systems, initiating negotiations for the elimination of nuclear weapons globally, initiating talks on a Middle East zone free of weapons of mass destruction, taking unilateral executive action that doesn’t require a long treaty process—negotiations with Russia and then Senate ratification, which would be very difficult. We could cut our reserve nuclear weapons, get rid of a bunch of those. But even the current deployed nuclear weapons, we could go down to a thousand or fewer, as the Pentagon has suggested in the past and the U.S. actually wanted to do with Russia, and then challenge Russia to reciprocate. Those are just some of the steps that would be meaningful and worth a trip to Hiroshima.

Meanwhile, Donald Trump’s campaign is facing criticism after it named a prominent white supremacist leader to its list of delegates in California. William Johnson is the head of the American Freedom Party, which has openly backed the creation of “a separate white ethnostate” and the deportation of almost all nonwhite citizens from the United States. Johnson’s name appeared on a list of delegates published by California’s secretary of state on Monday. After Mother Jones broke the story on Tuesday, the Trump campaign blamed Johnson’s selection on a “database error.” But correspondence published by Mother Jones shows the Trump campaign was in touch with Johnson as recently as Monday.