Following yesterday’s attacks on Belgium, one suspect of involvement was arrested and another is now also reported as caught. Amy, Juan and guests consider how the international community should respond. 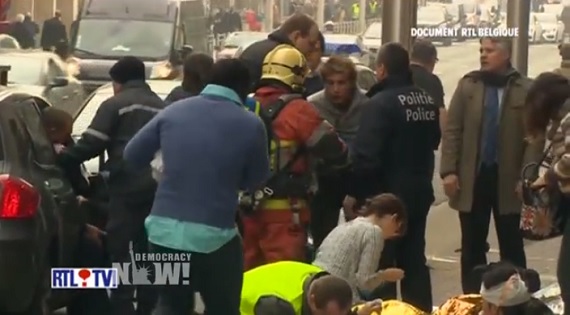 Scene in Brussels following one of the attacks. Image: video still

Following yesterday’s attacks on Belgium, one suspect of involvement was arrested and another is now also reported as caught. Today’s guests are Frank Barat in Brussels, journalist Joshua Hersh, who wrote this article after the Paris attacks, and Yasser Louati of the Collective Against Islamophobia in France. Here is a quote from the interview with Barat:

It came out of radicalization through what’s happening in Syria, which is actually key to understand the creation of ISIS. Syria and what’s happened in Syria in the last few years is a betrayal, a total betrayal, in part of the Western world. You know, people rising to fight its oppressor and the West sort of turning its back on them, allowing slaughter, this created so much anger, so much rancor. And when you put this on top of the failure of U.S. foreign policy and U.S. imperialism, when you put this on top the sort of ambitions of the West in terms of oil, in terms of trade routes and in terms of supporting dictators and Israel, you know, it creates a powerful and very dangerous mixture that then manifests in the form of ISIS or al-Qaeda or any other terrorist organizations. So we have to ask the tough questions. And we need answers.

Louati had this to say:

We hope the Belgian government will not act like the French government did, meaning brutality against the Muslim population and holding it responsible, directly or indirectly, for what happened. So far, the Belgian government is sending positive signals, and we hope that it won’t go down the path of said brutality against minorities. To give you a clear example of the French failures in the aftermath of the November 13th attacks, so far, after four months, 3,400 raids have been carried against homes, mosques, Muslim restaurants, etc., in total brutality, with a willingness to humiliate people. In the end, only four or five inquiries have been opened against—on the terror charges. This means that for four months you have been terrorizing innocent people and holding them accountable for your own failures. So I hope the Belgian government will look at the French failures and take another path, meaning that—you know, showing more solidarity, more unity in the face of a common threat.

Presidential candidates Ted Cruz and Donald Trump reacted to the Belgium attacks as might be expected. Cruz proposed that law enforcement “patrol and secure” Muslim neighborhoods. Trump urged the waterboarding of captured Paris suspect Salah Abdeslam: “I would do a lot more than waterboarding.” Today’s show also reports on the Supreme Court hearing on whether Puerto Rico can restructure a portion of its $70 billion debt; and Amy and Juan host a debate on which Democratic candidate would most likely beat Donald Trump to the White House.