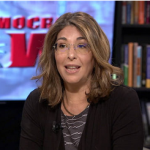 Naomi Klein: 4,645 Deaths in Puerto Rico from Hurricane Maria Were “State-Sponsored Mass Killing”
Puerto Rico continues to recover from Hurricane Maria, which devastated the island last September. Researchers at Harvard recently revealed the death toll from Hurricane Maria may be a staggering 70 times higher than the official count. The official death toll still stands at 64, but the new study estimates a death toll of at least 4,645, with some projections topping 5,700. The Harvard study found that “interruption of medical care was the primary cause of sustained high mortality rates in the months after the hurricane, a finding consistent with the widely reported disruption of health systems. Health care disruption is now a growing contributor to both morbidity and mortality in natural disasters.” Naomi Klein is an author, journalist and a senior correspondent for The Intercept. Her new book is titled “The Battle for Paradise: Puerto Rico Takes On the Disaster Capitalists.” Katia Avilés-Vázquez is a Puerto Rican environmental activist and member of Organización Boricuá de Agricultura Ecológica, and Elizabeth Yeampierre, executive director of UPROSE and co-chair of the Climate Justice Alliance.

“The Battle for Paradise”: New Intercept Doc Goes Inside Struggle over Puerto Rico’s Future
Nearly nine months after Hurricane Maria devastated Puerto Rico, the island’s residents and Wall Street investors are engaged in a pitched battle over who will control the future of the island. A new short documentary, “The Battle for Paradise,” produced by Naomi Klein and The Intercept takes you inside this ongoing struggle for power.

Puerto Rico Is a “Playground for the Privileged”: Investors Move In as Homes Foreclose & Schools Close
While healthcare, the public school system and infrastructure in Puerto Rico are flailing nine months after Hurricane Maria ravaged the island, wealthy investors have descended on the island to turn a profit.