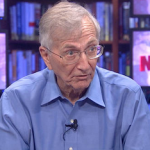 “Our Country’s biggest enemy is the Fake News,” President Trump tweeted last week, in his latest attack on the nation’s press. A week earlier, federal prosecutors revealed they had secretly captured years’ worth of phone and email data from journalist Ali Watkins, who broke several high-profile stories.

Seymour Hersh: Media Today Must Cover Yemen & Trump Policy, Not Get Distracted by Tweets
“Our Country’s biggest enemy is the Fake News,” President Trump tweeted last week, in his latest attack on the nation’s press. A week earlier, federal prosecutors revealed they had secretly captured years’ worth of phone and email data from journalist Ali Watkins, who broke several high-profile stories related to the Senate Intelligence Committee. A former top aide on the committee, James Wolfe, has been charged with lying to the FBI about his contacts with the press. Meanwhile, Reporters Without Borders recently dropped the United States to number 45 in its annual ranking of press freedom. When the group first published its list in 2002, the United States came in at number 17. The nation’s best-known investigative journalist, Seymour Hersh, has a new book out looking back on his more than half-century of scoops and digging up secrets. It’s titled “Reporter: A Memoir.”

Remembering the My Lai Massacre: Seymour Hersh on Uncovering the Horrors of Mass Murder in Vietnam
In 1970, Seymour Hersh won the Pulitzer Prize for his reporting on how the U.S. slaughtered more than 500 Vietnamese women, children and old men in the village of My Lai on March 16, 1968. The event became known as the My Lai massacre.

Investigative Reporter Sy Hersh: Working with Gene McCarthy’s Presidential Bid Shaped My Life Path
Before investigative reporter Sy Hersh exposed many of the government’s deepest secrets, from Nixon’s bombing of Cambodia to the CIA’s role undermining the Chilean government of Salvador Allende, he served as press secretary for Democrat Eugene McCarthy during his 1968 presidential bid.

Sy Hersh: I Knew Richard Nixon Beat His Wife in 1974, But Did Not Report the Story
Soon after President Richard Nixon resigned in 1974, Seymour Hersh got a call from a source at a California hospital. He learned that Nixon had beaten his wife so severely in 1974 that she sought treatment at an emergency room. Hersh did not report the story. Years later, he received criticism for this choice. Hersh says of his decision not to report on Nixon beating his wife, “I was obtuse to the notion that it was a crime. … I didn’t get it.”

Sy Hersh: Henry Kissinger Must “Count Burned and Maimed Cambodian & Vietnamese Babies” in His Sleep
While Sy Hersh was working at The New York Times Washington bureau, he would watch reporters call then-Secretary of State Henry Kissinger nearly every day, diligently writing down his comments and then reproducing them as front-page news. This is one of many stories Hersh tells in his new memoir, “Reporter.” Hersh says, “What I always said about Kissinger, publicly, and again and again, is that when people … can’t sleep and they count sheep, I think Kissinger has to count burned and maimed Cambodian and Vietnamese babies the rest of his life. But, of course, he doesn’t.”