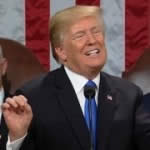 In Warmongering First State of the Union, Trump Doubles Down on Gitmo & Escalates Nuclear War Threat
President Trump delivered his first State of the Union Tuesday night. During the lengthy address, Trump announced he’d signed an executive order keeping the Guantánamo Bay military prison open, and escalated his warmongering rhetoric against North Korea, calling the North Korean government “depraved” and warning it poses a nuclear risk to the United States.

Ilhan Omar, First Somali-American State Lawmaker: Trump’s SOTU was “Disgusting” & “Fascist”
During President Trump’s first State of the Union address Tuesday night, he repeatedly tried to conflate immigrants, including DREAMers, with terrorists and gang members—the latest in a string of racist or xenophobic statements Trump has made throughout his time in office. Yet, on Tuesday night, many lawmakers with the Congressional Black Caucus protested against Trump’s racism—and his recent comments calling African nations “shithole countries”—by wearing traditional African kente cloth. Minnesota state Representative Ilhan Omar, the highest-elected Somali-American public official in the United States, has more.

We Are Not Going to Be Intimidated: Undocumented Activist Attends SOTU Despite Threat of Arrest
On Tuesday, Republican Rep. Paul Gosar of Arizona asked the U.S. Capitol Police to arrest undocumented immigrants attending President Trump’s State of the Union address. Gosar’s threat didn’t stop many undocumented activists from attending after they were invited by Democratic lawmakers. Maru Mora Villalpando is an activist and undocumented immigrant with the group Northwest Detention Center Resistance and the group Mijente. She attended the State of the Union as a guest of Washington Senator Maria Cantwell.

Made in the USA: The Real History of the MS-13 Gang Trump Talked About in State of the Union
During President Trump’s first State of the Union, he called on Congress to pass an immigration overhaul and repeatedly tried to conflate immigrants, including DREAMers, with terrorists and gang members. Among Trump’s guests to the State of the Union were the parents of two young girls who were killed by members of the MS-13 gang two years ago in Long Island, New York. MS-13 is a gang that originated in Los Angeles in the 1980s and has since spread to Central America as a result of the U.S. mass deportation policies. Daniel Denvir is writer-in-residence at Harvard Law School’s Fair Punishment Project. His 2017 article for The Washington Post is titled “Deporting people made Central America’s gangs. More deportation won’t help.”

Trump’s “Backward-Looking” Speech Ignores Climate Change, While Pushing for “Beautiful, Clean Coal”
On Tuesday night at President Trump’s first State of the Union, there were two words conspicuously missing from Trump’s lengthy address: climate change. Trump did, however, celebrate “beautiful, clean coal” and the rollback of key regulations to protect the environment.