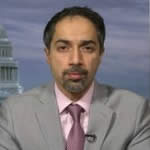 Trump’s Vow to Support Iran Opposition Carries “No Credibility” as Demonstrations Enter Sixth Day
As anti-government demonstrations enter their second week in Iran and spread to several key cities, President Donald Trump tweeted it’s ”TIME FOR CHANGE!” and U.N. Ambassador Nikki Haley called for an emergency meeting to discuss the developments. “Despite the attention that these anti-government protesters have gotten over the past week, there was no indication … that this was a repeat of 2009. … This was not a mass uprising,” says Tehran-based reporter Reza Sayah. Trita Parsi, founder and president of the National Iranian American Council, notes a new budget deal in Iran’s parliament that would cut government payments to the poor and raise fuel prices 50 percent was “the straw that broke the camel’s back” prior to the protests.

Erica Garner was “Unbought and Unbossed” in Push for Justice After Her Father Died in NYPD Chokehold
We remember Black Lives Matter activist Erica Garner, who died Saturday after she fell into a coma following an asthma-induced heart attack. She was just 27 years old. Erica helped lead the struggle for justice for her father, Eric Garner, who was killed when police officers in Staten Island wrestled him to the ground, pinned him down and applied a fatal chokehold in 2014. His final words were “I can’t breathe,” which he repeated 11 times. In August, Erica gave birth to her second child, a boy named after her late father. Doctors say the pregnancy strained her heart. Erica is featured in her own words on Democracy Now!, along with two people who were close to her: The Intercept’s Shaun King and The Root’s Kirsten West Savali, whose piece is headlined “Erica Garner: ’I’m in This Fight Forever.’”