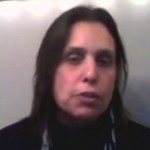 On Tuesday, Donald Trump signed a pair of presidential memorandums to revive the Keystone XL and Dakota Access oil pipelines—two major projects halted by the Obama administration following massive resistance from indigenous and environmental groups. Native American groups and their supporters have long opposed the Dakota Access pipeline being laid a mile from the Standing Rock Sioux Reservation and beneath the tribe’s primary source of drinking water.

The Standing Rock Sioux Tribe tweeted, “Trump’s executive order on #DAPL violates the law and tribal treaties. We will be taking legal action.” The tribe added, “Creating a second Flint does not make America great again.” Winona LaDuke, Native American activist and executive director of the group Honor the Earth, offers comments. She lives and works on the White Earth Reservation in northern Minnesota.

“Water is Life, Water is Sacred”
As Donald Trump signs a presidential memorandum to revive the Dakota Access pipeline, Amy Goodman speaks to Standing Rock activist Bobbi Jean Three Legs. Last year, she and Joseph White Eyes led a group of youth water runners on a 2,000-mile trek from Sacred Stone Camp in Cannon Ball, North Dakota, to Washington, D.C., where they delivered a petition against the Dakota Access pipeline to the Army Corps of Engineers headquarters.

“I’m Afraid They Are Out to Kill”
On Tuesday, Donald Trump took action to revive the contested Keystone XL and Dakota Access oil pipelines. He signed the presidential memorandum as water protectors at Standing Rock in North Dakota were gathered to testify to a wide range of police abuse. One of those to testify was Diné water protector Marcus Mitchell, who has lost sight in his left eye after being hit by a bean bag round fired by police last week.

Boycott the Banks: Actor Shailene Woodley Calls for Action
On Tuesday night at the Sundance Film Festival, Democracy Now! interviewed actor and activist Shailene Woodley, who participated in a protest Monday against the festival’s sponsor Chase Bank over its support for the Dakota Access pipeline. Woodley is known for her role in “The Divergent Series,” and she most recently starred in the film “Snowden,” about NSA whistleblower Edward Snowden. She was arrested in October for protesting the Dakota Access pipeline.

A Complete Disregard for Democracy
In addition to issuing presidential memos to revive the Keystone XL and Dakota Access oil pipelines, President Trump and his team have taken several other actions that have alarmed environmentalists. All references to climate change have been removed from the White House website. Reuters is reporting the Environmental Protection Agency has also been ordered to remove its climate change page, which contains links to scientific global warming research as well as detailed data on emissions. The EPA has also been prohibited from issuing press releases, publishing blog updates or even posting information on social media. In addition, the Centers for Disease Control and Prevention has abruptly canceled a major conference on climate change and public health.

Donald Trump Against the World | Truthout
John Feffer looks at the troubling lack of empathy, blatant Islamophobia and strategic nationalism in the rather homogeneous Trump cabinet.

Seymour Hersh Blasts Media for Uncritically Promoting Russian Hacking Story | The Intercept
In an interview with Jeremy Scahill, veteran investigative reporter Seymour Hersh blasts the media for its credulity and laziness on the Russian hacking story. He also, however, criticizes the Trump administration for its attacks on the press.

Compromise doesn’t work with our political opponents. When will we learn? | The Guardian
In her first column since her commutation, Chelsea Manning explains why Pres. Obama’s attempts to find common ground with the Repugs went too far, and the impact this had on his legacy.

Trump Fuming Over Women’s March | The Young Turks
We all know Trump is a narcissist, but this discussion with Cenk Uygur and Ana Kasparian really highlights just how bad the problem is.

The true, correct story of what happened at Donald Trump’s inauguration | Washington Post
OMG, how could we have been so wrong?! Alexandra Petri lays down how it really was at Trump’s inauguration. It was the best event ever!!! and of course so many people were there… Thanks to Lizanne Webb for the heads-up on this superb satire.