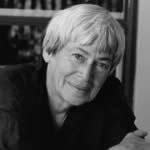 Celebrated fantasy novelist Ursula Le Guin has died at the age of 88. The feminist writer was the author of more than 20 novels, more than a dozen collections of poetry and another dozen children’s books. Among her most famous works was her 1969 novel “The Left Hand of Darkness.”

Fantasy Novelist Ursula Le Guin, Who Explored Resistance & Change, Dies at Age 88
Celebrated fantasy novelist Ursula Le Guin has died at the age of 88. The feminist writer was the author of more than 20 novels, more than a dozen collections of poetry and another dozen children’s books. Among her most famous works was her 1969 novel “The Left Hand of Darkness,” which is set on a planet where people are “ambisexual”—neither male nor female—and contains one of the most famous sentences ever written in a fantasy novel: “The King was pregnant.” Ursula Le Guin’s 1974 novel “The Dispossessed” is also one of the most celebrated explorations of utopia, dystopia, capitalism, anarchism and oppression.

“Strong Island”: Trans Filmmaker Yance Ford Searches for Justice After His Brother’s Racist Murder
On Tuesday, Yance Ford became the first trans director to be nominated for an Academy Award. His film “Strong Island” is up for best documentary. Ford, who is African-American, chronicles what happened to his own family after his brother, William Ford Jr., was shot dead by a white mechanic in Long Island, New York, in 1992. The killer was questioned by police but never charged. “My brother’s case 25 years ago simply affirms what we are seeing now,” Ford says. “It doesn’t matter if you follow the rules. The justice system isn’t meant to work for people of color in this country.”

Alabama’s Hale County is Subject of Poetic Documentary on Blackness and Everyday Life in the Black Belt
Two weeks before he was assassinated 50 years ago, Martin Luther King Jr. spent the night in Hale County, Alabama, in the heart of the Black Belt of Alabama. He came to Greensboro on March 21, 1968, in an effort to rally support for his Poor People’s Campaign. Supporters of King had to hide him in a small wooden house on the outskirts of Greensboro as members of the Ku Klux Klan tried to hunt him down. It would be the last time King was in Hale County, Alabama. Two weeks later, he was assassinated in Memphis, Tennessee. The safe house where King stayed is now a museum. Now Hale County is the subject of a new documentary: “Hale County This Morning, This Evening.” The film just premiered at the Sundance Film Festival and looks at life in the predominantly African-American county, which is named after a Confederate general. In the film, director RaMell Ross paints an impressionistic portrait of life in the Black Belt in the 21st century.