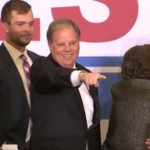 No Moore! Doug Jones Rides GOP Storm to Senate in Victory That Could Add Momentum to #MeToo Movement
In a stunning upset, Democrat Doug Jones defeated Republican Roy Moore in the controversial race to fill the Alabama Senate seat left vacant by Attorney General Jeff Sessions. With 100 percent of the vote tallied, Jones led Moore by nearly 21,000 votes, a margin of 1.5 percentage points. With Jones in the Senate, the Republicans’ majority will narrow to 51-49, endangering Trump’s agenda and possibly ushering in a Democratic wave in next year’s congressional elections. Roy Moore has so far refused to concede the race, and on Tuesday night called for a recount.

FCC Set to Roll Back Digital Civil Rights with Thursday’s Vote to Repeal Net Neutrality
The Federal Communications Commission is set to vote Thursday on whether to repeal the landmark net neutrality protections passed under President Obama in 2015. Net neutrality is the principle that internet service providers treat web content equally and do not block or prioritize some content over others in return for payment. The move could allow internet service providers to cut speeds and jack up prices, and drew a record 22 million comments to the FCC, which critics say the agency has not fully reviewed. “We’re talking about the future of media here and who has access and control and whose voices are valued, whose stories are told, whose stories are dehumanized,” says Joseph Torres, senior adviser for government and external affairs for Free Press, the national media reform organization.

Major Education Victory in Philadelphia as Parents, Teachers & Activists Reclaim Control of Schools
We look at a major education victory in Philadelphia, Pennsylvania, where parents, teachers and activists mounted a successful campaign to reclaim control of their local public school system after then-Pennsylvania Governor Mark Schweiker declared it financially distressed in 2001. Under the plan, dozens of Philadelphia public schools closed, and the city saw a spike in charter schools. Community groups responded by forming a coalition to pressure Pennsylvania Governor Tom Wolf and Philadelphia Mayor Jim Kenney to return control over the School District to local voters. Last month, Mayor Kenney heeded organizers’ demands and called for the dissolution of the commission. This came as the city also elected civil rights attorney Larry Krasner as district attorney, who campaigned in part on ending the school-to-prison pipeline.