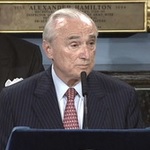 New York City Police Commissioner William Bratton has announced he is resigning next month. Bratton was a lead advocate of the so-called broken windows theory that called for officers to crack down on minor infractions in an attempt to decrease more violent crime. Supporters credit him with lowering crime rates, but critics say broken windows policing unfairly targets communities of color. 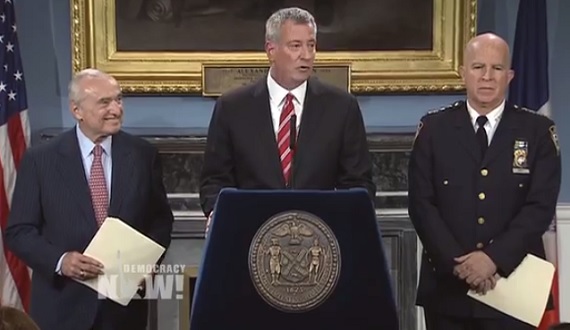 New York City Police Commissioner William Bratton has announced he is resigning next month. Bratton was a lead advocate of the so-called broken windows theory that called for officers to crack down on minor infractions in an attempt to decrease more violent crime. Over the past four decades, Bratton has served as New York police commissioner twice as well as the head of the Boston and Los Angeles police departments. Supporters of Bratton credit him with lowering crime rates, but critics say broken windows policing unfairly targets communities of color.

In a statement, Black Lives Matter co-founder Opal Tometi told Democracy Now!, “William Bratton is the key architect of programs that have terrorized our communities for decades. His implementation of broken windows theory has wreaked havoc on communities from Los Angeles to New York City and beyond.” Bratton resigned just one day after hundreds of activists gathered outside New York City Hall demanding the defunding of the New York Police Department and his firing. Protests against William Bratton have been escalating ever since the police killing of Eric Garner two years ago.

Bratton has also served as head of the Boston and Los Angeles police departments. But Bratton’s resignation doesn’t mean he’s retiring. His next job will be at Teneo Holdings, a global private consulting firm with controversial ties to Hillary Clinton. Bratton will be the chairperson of a new branch of the company called Teneo Risk.

When you woke up this morning, chances are your morning routine was touched in some way by a private equity firm. From the water you drink to the roads you drive to work, to the morning newspaper you read, Wall Street firms are playing an increasingly influential role in daily life. So says a compelling new article in The New York Times, “This Is Your Life, Brought to You by Private Equity.”

Imprisoned Army whistleblower Chelsea Manning faces new charges after she tried to commit suicide last month. The Army reportedly told Manning she is being investigated on administrative charges that include having prohibited property in her cell and resisting being moved out of the cell. If convicted, Manning could face indefinite solitary confinement and additional time in prison. It could also hurt her chance of parole.

Chelsea Manning is serving a 35-year sentence in the disciplinary barracks in Fort Leavenworth, Kansas. She has been subjected to long stretches of solitary confinement and denied medical treatment related to her gender identity.

In a newly published interview with Amnesty International, Manning said, “I am always afraid. I am still afraid of the power of government. A government can arrest you. It can imprison you. It can put out information about you that won’t get questioned by the public—everyone will just assume that what they are saying is true. Sometimes, a government can even kill you—with or without the benefit of a trial.”