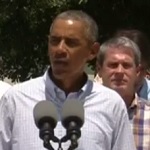 On Tuesday, President Obama visited Louisiana for the first time since the devastating floods that killed 13 people and damaged 60,000 homes. The Red Cross has called it the worst natural disaster in the United States since Hurricane Sandy. While many climate scientists have tied the historic floods in Louisiana to climate change, President Obama made no link during his remarks. 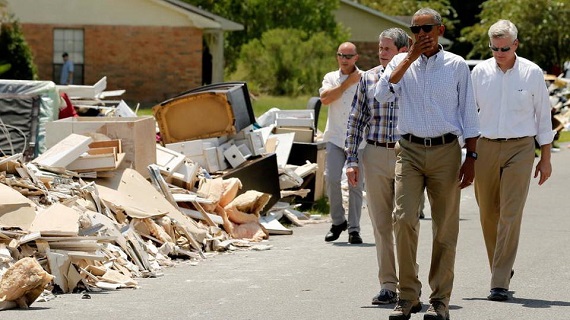 On Tuesday, President Obama visited Louisiana for the first time since the devastating floods that killed 13 people and damaged 60,000 homes. The Red Cross has called it the worst natural disaster in the United States since Hurricane Sandy. While many climate scientists have tied the historic floods in Louisiana to climate change, President Obama made no link during his remarks. However, on Tuesday, four environmental activists were arrested in New Orleans protesting the Interior Department’s decision to go ahead with a lease sale of up to 24 million acres in the Gulf of Mexico for oil and gas exploration and development. The sale is being held today in the Superdome—the very building where thousands of displaced residents of New Orleans sought refuge during Hurricane Katrina 11 years ago. Amy Goodman spoke to Antonia Juhasz, an oil and energy analyst, author of “Black Tide: The Devastating Impact of the Gulf Oil Spill.”

A new article in the medical journal The Lancet has concluded much of the Northern Hemisphere will be too hot by 2085 to host the Summer Olympics. Researchers are projecting only eight cities in the hemisphere outside of Western Europe would be cool enough to host the Games. This includes just three cities in North America: Calgary, Vancouver and San Francisco. The list of cities where it could be too hot is staggering: Istanbul, Madrid, Rome, Paris, Budapest, Tokyo, New York, Chicago, Los Angeles—and the list goes on. Extreme high temperatures have already impacted the athletic world. In 2007, high heat forced the cancellation of the Chicago Marathon. At this year’s U.S. Olympic marathon trials in Los Angeles, 30 percent of the runners dropped out of the race due to the heat.

Another new study has found that without action on climate change, the millennial generation as a whole will lose nearly $8.8 trillion in lifetime income dealing with the economic, health and environmental impacts of climate change. The study, “The Price Tag of Being Young: Climate Change and Millennials’ Economic Future,” was produced by NextGen Climate and Demos.

Last week, Donald Trump once again upended his campaign team and named Stephen Bannon, the head of Breitbart Media, to be his campaign chief. Breitbart regularly sparks controversy with headlines such as “Birth Control Makes Women Unattractive and Crazy,” “Trannies Whine About Hilarious Bruce Jenner Billboard” and “Bill Kristol: Republican Spoiler, Renegade Jew.” In a new article published by Mother Jones, investigative journalist Sarah Posner writes, “By bringing on Stephen Bannon, Trump was signaling a wholehearted embrace of the ‘alt-right,’ a once-motley assemblage of anti-immigrant, anti-Muslim, ethno-nationalistic provocateurs who have coalesced behind Trump and curried the GOP nominee’s favor on social media.”