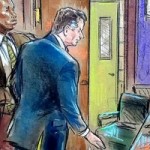 Michael Cohen Pleads Guilty & Implicates Trump as Paul Manafort Is Convicted. Is Impeachment Next?
Talk of the possible impeachment of President Trump is growing in Washington after Tuesday’s stunning legal developments. In New York, Trump’s longtime personal lawyer and fixer, Michael Cohen, pleaded guilty to eight criminal charges, including tax evasion, bank fraud and campaign finance violations. Two hundred miles away, in Virginia, Trump’s former campaign manager Paul Manafort was found guilty of eight charges related to tax fraud and bank fraud. The Cohen case is likely to put the president in the most legal jeopardy. Cohen, who worked for Trump from 2006 until this year, admitted in court that he arranged to illegally pay out money to two women—an adult film star and a Playboy model—to keep them from speaking during the 2016 campaign about their affairs with Donald Trump. Cohen said the payments were made “in coordination with and at the direction of a candidate for federal office” and that they were made “for the principal purpose of influencing the election.” Cohen’s lawyer Lanny Davis wrote on Twitter, “If those payments were a crime for Michael Cohen, then why wouldn’t they be a crime for Donald Trump?” Marcy Wheeler is an independent journalist who covers national security and civil liberties. She runs the website EmptyWheel.net.

Trump Administration Admits 1,400+ More People Will Die Each Year Following Coal Plant Deregulation
President Trump rallied supporters Tuesday night in West Virginia to announce a massive rollback of Obama-era environmental regulations on coal-fired power plants and carbon dioxide emissions that contribute to climate change. Trump’s “Affordable Clean Energy” proposal would allow individual states to decide whether to curb emissions. The Environmental Protection Agency’s own data shows the plan could cause up to 1,400 more premature deaths a year by 2030. The Washington Post reports the deregulation would also lead to the release of at least 12 times more carbon dioxide into the atmosphere over the next decade. The current head of the EPA, Andrew Wheeler, is a former coal industry lobbyist. Mary Anne Hitt is director of the Sierra Club Beyond Coal Campaign.

Meet Maya Little, UNC Student Whose Protest Ignited the Movement to Topple a Racist Confederate Statue
We end today’s show in North Carolina, where hundreds of student protesters in Chapel Hill toppled the “Silent Sam” Confederate statue at the University of North Carolina Monday night, on the eve of the first day of classes. The statue was erected in 1913 to honor Confederate soldiers, and has been the target of repeated protests. Maya Little is a UNC doctoral student facing charges of property destruction and possible expulsion for pouring red ink and her own blood on the statue during an earlier protest in April.