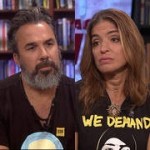 Parents of Murdered Parkland Student Joaquin Oliver on Using Art to Demand End to Gun Violence
Students at Marjory Stoneman Douglas High School in Parkland, Florida, return to class today, amid heavy security, after summer break. It was six months ago Tuesday when a former student, armed with a semiautomatic AR-15, gunned down 17 students, staff and teachers in just three minutes. It was one of the deadliest school shootings in U.S. history. After the horrific attack, many of the students who survived the shooting became leading activists for gun control. Among the students killed at Stoneman Douglas High School was Joaquin Oliver. On Tuesday, Democracy Now! spoke to Joaquin’s parents, Manuel and Patricia Oliver, who have started a new nonprofit called Change the Ref to promote the use of urban art and nonviolent creative confrontation to expose the disastrous effects of gun violence.

John Carlos Frey: Deported Parents Say Trump Administration Is Still Separating Families at Border
Nearly three weeks after the court-imposed deadline for reuniting families forcibly separated at the U.S.-Mexico border, the Trump administration has admitted that 559 children remain in government custody. More than 360 of these children are separated from parents who have been deported by the U.S. government. Most of the families separated at the border were seeking asylum from violence in their home countries of El Salvador, Honduras and Guatemala. Instead, the parents were charged in federal court with a crime for illegally crossing the border, then held in jail and detention. The children, some still breastfeeding, were sent to shelters around the country. Judge Dana Sabraw, who ruled the Trump administration must reunite all separated families, said, “For every parent who is not located, there will be a permanent orphaned child, and that is 100 percent the responsibility of the administration.” John Carlos Frey is an award-winning investigative reporter with The Marshall Project and special correspondent with “PBS NewsHour.” He is recently back from reporting trips in Guatemala and Nogales, Mexico, where he spoke with asylum seekers waiting for days and even weeks to enter the United States.

Military Cover-Up? 100s of Migrants Feared Dead in Mass Grave at AZ’s Barry Goldwater Bombing Range
As the Trump administration continues an immigration crackdown at the border, asylum seekers are being told to wait for days or weeks on end before being allowed entry into the United States. This practice is leading more and more immigrants to risk their lives on dangerous journeys through the desert to enter the country instead, says investigative reporter John Carlos Frey. He speaks about the Barry Goldwater bombing range in Arizona, a vast swath of land across the border from Nogales, Mexico. The area is part of an incredibly dangerous migrant path, but aid workers are not allowed access to the site. Frey estimates hundreds of immigrants could have died there in recent years but that their bodies have not been recovered.