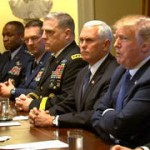 President Trump threatened to attack Iran on Tuesday if it restarts its nuclear weapons program, while at the same time hinting he plans to scrap the international deal to prevent Iran from obtaining nuclear arms. Trump made his comments at the White House during a meeting with French President Emmanuel Macron.

Trump Decries Iran Nuclear Deal as He Fills Cabinet with Advocates Pushing Regime Change in Tehran
President Trump threatened to attack Iran on Tuesday if it restarts its nuclear weapons program, while at the same time hinting he plans to scrap the international deal to prevent Iran from obtaining nuclear arms. Trump made his comments at the White House during a meeting with French President Emmanuel Macron, who had come to Washington in an attempt to preserve the Iran deal. Trump must decide by May 12 whether the U.S. should stay in the deal. Macron said he opposes throwing out the existing nuclear deal but is open to a new agreement with Iran to address Iran’s role in Syria and other issues. But advocates say Trump is likely to leave the deal and that the U.S. is trying to force Iran to be the party that ends up leaving the accord—and that Trump’s National Security Adviser John Bolton and State Department Secretary nominee Mike Pompeo aren’t “seriously interested” in further negotiations. “I think the United States has never abandoned the idea of regime change in Iran,” says Jamal Abdi, the vice president for policy at the National Iranian American Council.

Texas Mother Recalls Being Forced to Bury Fetal Remains After Miscarriage in “Horrific” Ordeal
Last week, a U.S. appeals court declared unconstitutional an Indiana law signed by then-Governor, now Vice President, Mike Pence, that requires fetuses to be buried or cremated. This comes as Texas passed a law last year saying all fetal remains had to be buried or cremated, and also banned donation of that tissue for research purposes. In January, U.S. District Judge David Alan Ezra temporarily halted the fetal remains law, but Texas Attorney General Ken Paxton has vowed to continue fighting for it. Blake Norton, who had a miscarriage in 2015 at the Seton Medical Center in Austin, Texas, was forced to choose whether she would let the hospital bury the remains in a shared grave, or arrange for a “private burial” at her own expense.

How VP Mike Pence Enshrined Life-Threatening Catholic Hospital Religious Practices into Indiana Law
According to reporting by Rewire.News, catholic hospitals across the country are imposing dangerous and life-threatening mandates on their patients, including requiring fetal burial after a miscarriage and restricting access to contraception, abortion, fertility treatments and gender-affirming care for transgender patients. And now, right-wing politicians like Vice President Mike Pence are pushing to enshrine these dangerous practices into law.

Arizona Reproductive Justice Activist, Now Free from ICE Jail, Says She Was Targeted for Activism
Immigrant rights and reproductive justice activist Alejandra Pablos has been freed from the for-profit Eloy Detention Center, where she was detained for more than 40 days after she reported to a routine ICE check-in on March 7. Advocates say she was detained in retaliation for her activism, particularly for protesting outside the Homeland Security Department office in Virginia earlier this year. Pablos works for the National Latina Institute for Reproductive Health. Pablos was a legal permanent resident who grew up in Arizona, but a conviction for driving under the influence nearly a decade ago has made her subject to deportation.