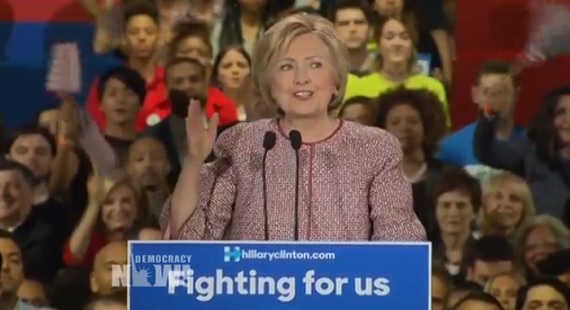 I think she might be practicing a regal wave there. Image: video still

On Tuesday, Republican Donald Trump and Democrat Hillary Clinton each scored decisive victories in New York, moving both candidates closer to becoming their respective parties’ presidential nominees. In the Republican race, Trump is poised to win 89 of the 95 delegates up for grabs. In the Democratic race, former New York Senator Hillary Clinton beat Senator Bernie Sanders by a margin of 58 to 42 percent. Sanders won the majority of counties in the state, but Clinton won big in the metropolitan New York area.

However, the New York City Elections Board has confirmed that more than 125,000 Brooklyn voters had been removed from the voter rolls since November 2015. There were also reports that polling staff were unable to operate voting machines, gave out conflicting information and erroneously directed voters to alternate sites. In a statement, New York City Mayor Bill de Blasio said, “It has been reported to us from voters and voting rights monitors that the voting lists in Brooklyn contain numerous errors, including the purging of entire buildings and blocks of voters from the voting lists.”

Finally, Glenn Greenwald makes a special appearance to report on an apparent coup d’etat in Brazil, which he points out has only been a democracy for 30 years, as the current President faces impeachment on corruption charges. Greenwald says:

The corruption is pervasive in essentially every influential political faction in Brazil, including all of its political parties. That includes the Workers’ Party, the left-wing party of Lula and Dilma, the current president, but also, even to a greater extent, the opposition parties on the center and the right that are trying to replace it. So corruption is very real. There is a very—there’s been a—what has been, until recently, an impressive judicial investigation that has resulted in the arrest and prosecution of some of the country’s richest and most powerful figures—something that you would never see in the United States—billionaires being hauled off to jail for bribery and money laundering and tax evasion and corruption, and sentenced to many years in prison. And virtually every political opponent of President Rousseff is implicated by this corruption, and many of the people in her party are, as well.