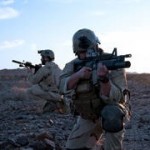 The New York Times is reporting President Trump launched airstrikes against Syria on Friday despite opposition from his own defense secretary, James Mattis. Meanwhile, a number of lawmakers have described the strikes on Syria as illegal since Trump did not seek congressional authorization.

Unlimited Worldwide War: ACLU Warns Senate Against Giving Trump Blank Check to Declare War
The New York Times is reporting President Trump launched airstrikes against Syria on Friday despite opposition from his own defense secretary, James Mattis, who wanted Trump to first get congressional approval. Meanwhile, a number of lawmakers have described the strikes on Syria as illegal since Trump did not seek congressional input or authorization. This comes as Congress is considering rewriting the war powers granted to the president after the September 11 attacks—what’s known as the AUMF, or Authorization for Use of Military Force. On September 14, 2001, the current AUMF passed the Senate 98-0 and 420-1 in the House, with California Democrat Barbara Lee casting the sole dissenting vote. Since then, it’s been used by Presidents Bush, Obama and Trump to justify at least 37 military operations in 14 countries—many of which were entirely unrelated to 9/11. On Monday, Senate Foreign Relations Committee Chair Bob Corker, a Tennessee Republican, and Democratic committee member Tim Kaine of Virginia introduced legislation to replace the AUMFs with a new one. Corker and Kaine claim their legislation would strengthen congressional oversight. But critics, including the American Civil Liberties Union, warn the proposed legislation would actually expand the authority of President Trump and all future presidents to engage in worldwide war without limitations.

America’s #1 Weapons Salesman: Trump Promotes U.S. Arms Manufacturers & Weakens Export Rules
A new exposé by Reuters reveals how the Trump administration plans to make the U.S. an even larger weapons exporter by loosening restrictions on the sale of equipment ranging from fighter jets and drones to warships and artillery. Reuters reveals that the new initiative will provide guidelines that could allow more countries to be granted faster deal approvals, and will call on Cabinet officials to help close deals between foreign governments and U.S. defense contractors. In one example, Reuters reveals President Trump himself urged the emir of Kuwait, in a telephone call, to finalize a $10 billion fighter jet deal with Boeing, the country’s second-largest defense contractor. The exposé details the role U.S. Cabinet officials may be asked to play in pushing arms exports abroad as part of the new initiative, which will call for a “whole of government” approach—from the president and his Cabinet to military attachés and diplomats—to help draw in billions of dollars more in arms business overseas. The Trump administration is expected to announce the new rules as early as Thursday.

#FreeSiwatu: Pregnant Black Detroit Activist Jailed for Standing Her Ground & Protecting Her Family
An environmental activist and young black mother in Detroit may be forced to give birth behind bars, after standing her ground during a frightening encounter. Since she was 19 years old, Siwatu-Salama Ra has fought for environmental justice. She campaigned against the Marathon oil refinery and the Detroit Renewable Power trash incinerator. She represented Detroit at the Paris climate summit. She’s also worked to engage kids and educate young mothers about nutrition. Now, at age 26, Siwatu has been sentenced to a mandatory two years in prison, following an incident in which she brandished her unloaded—and legally registered—handgun while defending her mother and 2-year-old daughter. She was sentenced last month to two years in prison even though she is scheduled to give birth in June.