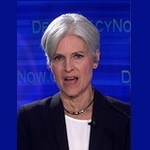 In a two-hour live special, Jill Stein “debates” Trump and Clinton from the Democracy Now! studio. You can play both videos in this post.

Donald Trump and Hillary Clinton faced off Monday night in one of the most anticipated debates in U.S. history. The debate was held at Hofstra University on Long Island and moderated by NBC Nightly News anchor Lester Holt. Throughout the 90-minute, often antagonistic, debate, Clinton and Trump sparred on everything from foreign policy to trade deals to personal stamina.

But third-party candidates, including Libertarian Gary Johnson and the Green Party’s Jill Stein, were excluded from the debate stage under stringent rules set by the Commission on Presidential Debates, which is controlled by the Democratic and Republican parties.

Democracy Now! therefore invited Johnson and Stein to review and “join” the debate in a live show that took place between 8 and 10 am EDT today. Johnson declined, but Stein agreed. Both segments are above.