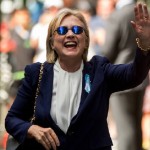 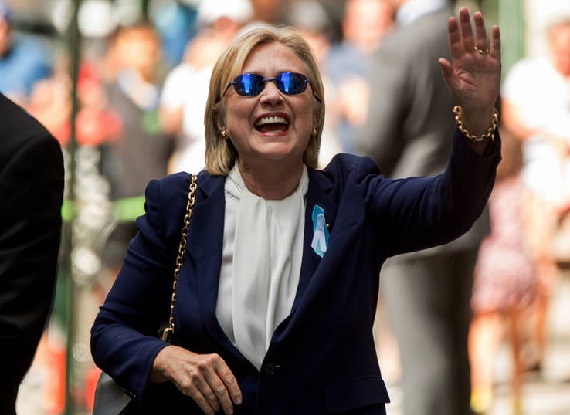 Hillary Clinton emerges from her daughter’s apartment following her collapse at the Sept. 11 memorial service Sunday.

This was supposed to be the second week of classes at Long Island University’s campus in Brooklyn, but the administration barred all 400 members of the faculty union from its Brooklyn campus after their contract expired on August 31. The new proposed contract would slash pay for adjunct professors and also pay faculty lower salaries compared to those earned by colleagues at a satellite campus. As part of the lockout, LIU cut off professors’ email accounts and health insurance, and told them they would be replaced. LIU President Kimberly Cline has assured students the lockout would not affect the beginning of the school year. But since the semester began, classes have been taught by replacement teachers, and many are assigned to teach subjects for which they have no experience.

As Democratic presidential candidate Hillary Clinton says she’ll release more medical records related to her bout with pneumonia and dehydration, Congressmember Barbara Lee urges Clinton to continue releasing details about her health, but downplays speculation about whether she could be replaced. “I think that we need to move forward. Hopefully, Donald Trump will submit his medical records,” says Lee. “I’m hoping that the American people really understand that the issues that are before us today, as it relates to global peace and security, as it relates to an economy that works for all, as it relates to ensuring that the bigotry and the hatred that is being spoken throughout our country, that we come together and unify and speak up in terms of our American values.”

Chase Strangio, lawyer for imprisoned Army whistleblower Chelsea Manning, speaks about the hunger strike Chelsea launched Friday to protest her prison conditions. In a statement, Manning said she would only consume water and medication until she’s provided “minimum standards of dignity, respect, and humanity.” She’s demanding a written promise from the Army that she will receive medically prescribed recommendations for her gender dysphoria. Manning is serving a 35-year sentence in the disciplinary barracks in Fort Leavenworth, Kansas. She has been subjected to long stretches of solitary confinement and denied medical treatment related to her gender identity. Strangio is a staff attorney at the ACLU who represents Chelsea Manning in a lawsuit against the Department of Defense.

The NCAA has announced it will move its seven championship events out of North Carolina in response to the state’s decision to pass the anti-LGBT law known as HB 2, or the “bathroom bill.” The law nullifies ordinances protecting LGBT people from discrimination and prohibits transgender people from using the bathroom that matches their gender identity. ACLU staff attorney Chase Strangio says it is encouraging to see sports organizations and corporations responding to the mobilization efforts of the trans community and their allies.

As many as 20 transgender women have been killed so far this year, including 28-year-old Rae’Lynn Thomas, a black transgender woman who was fatally shot by her mother’s ex-boyfriend in Columbus, Ohio, last month. Family members say the shooter, James Allen Byrd, frequently made transphobic comments to Rae’Lynn and sometimes called her “the devil.” There are now reports that another transgender woman may have been murdered over the weekend on the West Side of Chicago. The Chicago police have confirmed a body was found on Sunday, but have not released details.