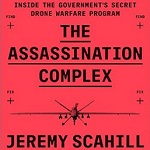 Today’s show features an interview with The Intercept‘s Jeremy Scahill and Glenn Greenwald. They discuss the new book, The Assassination Complex: Inside the US Government’s Secret Drone Warfare Program. More information on this book’s subject can be found here. 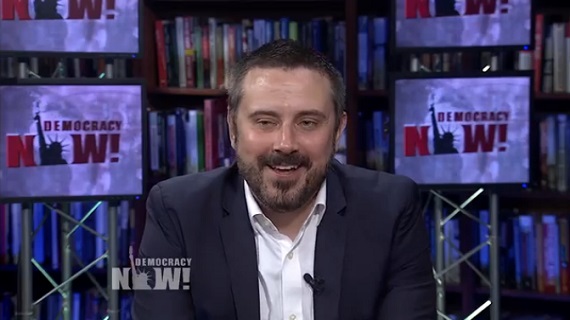 Today’s show features an interview with The Intercept‘s Jeremy Scahill and Glenn Greenwald. They discuss the new book, The Assassination Complex: Inside the US Government’s Secret Drone Warfare Program. More information on this book’s subject can be found here.

Here are some of the highlights of that interview:

Scahill:And what the Obama administration is doing right now is basically trying to rebrand and engage in historical revisionism about what is going to be one of the most deadly legacies of the Obama era, and that is that somehow they came up with a cleaner way of waging war. I would say that the most significant aspect of what President Obama has done, regarding drones and regarding the so-called targeted killing program around the world, is that Obama has codified assassination as a central official component of American foreign policy. And he has implemented policies that a Republican probably would not have been able to implement, certainly not with the support that Obama has received from so many self-identified liberals. It will be very interesting to see, if a Republican wins, how many of the MSNBC pundits and other, you know, so-called liberals—what their position will be on these very same policies.

But the fact is that the White House—we understand the White House is going to be releasing statistics, that some indicate are going to say that upwards of 60 people—six-zero people—have been killed in drone strikes outside of Iraq and Afghanistan, which is a—it’s a horrifying piece of propaganda, if that is—if that’s true. The reason that the Obama administration and that the president can say to the American people, “Well, we’ve only killed a small number of civilians,” is because—and our documents in the book show this—because they have embraced a system of counting the dead which almost always will result in zero civilians killed, because anyone who is killed in a drone strike, under this administration, is labeled as an enemy killed in action, an EKIA, until or unless posthumously proven to have not been a militant, a terrorist, what have you. This is a global assassination program that is authorized and run under what amounts to a parallel legal system or judicial system where the president and his advisers serve as the judge, jury and executioner of people across the globe. And so, the documents that we obtained will give lie to the proclamations that this somehow is a saner, less deadly form of warfare when it comes to impacting civilians.

Greenwald:And not only has he continued the system of indefinite detention—and he intended to continue the system of indefinite detention, even if he were able to close Guantánamo; his plan was simply to shift it to American soil—he’s done much more than that. He has institutionalized a program where now we don’t only just imprison people without any charges or due process, we don’t just eavesdrop on them, which was one of his big critiques of the Bush administration, without first giving them due process or a trial, we now just target them for execution, for death, for a death penalty.

You know, for a long time, a staple of Democratic ideology has been that the death penalty is wrong, even with a full trial and appeals and due process and lawyers and all of the constitutional rights that are afforded to criminal defendants. And yet President Obama has embraced a policy that says that he can literally go around the world, target people for death anywhere in the world that he wants, including places where we’re not at war, including even American citizens, and simply eradicate their lives based on his order—not in a war zone, people who are not engaged in combat at the time they’re killed. They’re killed in cars, in their houses, while they’re working, driving with their children, at funerals, rescuing people. Wherever it is that they might be found, they can simply be killed.

… And what this has meant is that these policies have shifted from being just a right-wing, extremist, Republican framework into one that is fully bipartisan, and therefore will be institutionalized and has been strengthened for years, if not decades, to come, in a way that George Bush and Dick Cheney could only have dreamed of.