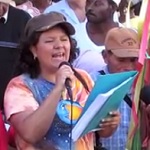 Officer Edward Nero, one of six officers charged in the death of Freddie Gray in Baltimore, has been acquitted on all charges. Meanwhile, a growing number of activists are calling on the U.S. to stop funding the Honduran military. There is suspicion that U.S.-trained forces were involved in the murder of Berta Cáceres. 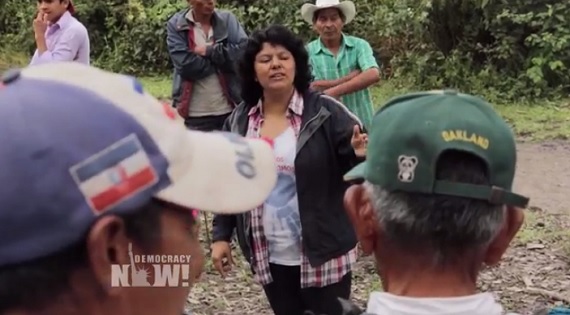 Berta Cáceres, who like Freddie Gray was unjustly killed. Now there are questions over how far the U.S. was involved in her assassination. Image: video still

A Baltimore police officer has been acquitted on all charges for his role in the arrest of Freddie Gray, who died of spinal injuries last year after he was arrested and transported in a police van. Officer Edward Nero faced misdemeanor charges of second-degree assault, reckless endangerment and two counts of misconduct in office. Nero was one of six officers charged in Gray’s death.

Judge Barry Williams handed down the verdict in a bench trial on Monday, ruling that “the state has not met its burden” to prove Nero’s guilt “beyond a reasonable doubt.” The ruling was met with little surprise from the community in a case that many said was the state’s weakest.

Freddie Gray died in April from a spinal injury sustained while being transported in the back of a police van. Gray’s family and attorney say his voice box was crushed and his spine was “80 percent severed at his neck.” Nero was one of six officers charged in Gray’s death.

Officer William Porter was the first one to go to trial, charged with involuntary manslaughter, second-degree assault, reckless endangerment and misconduct in office. In December, Judge Williams declared a mistrial in Porter’s case after jurors were unable to reach a verdict on any of the charges after three days of deliberation. Now all eyes are on the upcoming trial of officer Caesar Goodson, the driver of the police van and the only officer charged with murder in Gray’s death.

Amy Goodman spoke to Rev. Heber Brown III of Pleasant Hope Baptist Church, and Billy Murphy, attorney for the family of Freddie Gray. Murphy reported that “the community is exceptionally happy with Judge Williams’s handling of these cases. And they have full confidence that he’s able and willing to administer justice.” However, there are ongoing concerns about other aspects of the judicial process, as Brown explains:

Mr. Murphy is a expert jurist here and has knowledge of the inner workings of how the legal system works. But for everyday people, for laypeople like myself who don’t have that level of expertise, there is a great frustration with the pace of this case and the results of the case, as well, especially when you consider, Amy, that those who were charged in vandalizing stores were convicted with a great, deliberate speed, but it seems like those who were involved or connected in the death of Freddie Gray, the process slows down to snail’s pace.

And so I think that statement is an example of what I spoke of earlier, that people more and more are saying, “Enough with looking to the legal system or to City Hall to provide justice for us. We can work ourselves.” And so, with Baltimore United for Change, we are involved in organizing and building for power. And what that means on the ground is establishing black-led organizations, supporting black-led organizations, from public policy think tanks to freedom schools to solidarity economies and cooperative economics, to even an alternative food system. We are taking the role and responsibility to define what justice should look like for us, instead of waiting for these systems to tell us what justice should look like.

Also today, a growing number of activists in Honduras and in the United States are calling on the United States to stop funding the Honduran military, over accusations that state security forces have been involved in human rights violations, extrajudicial killings—and the murder of internationally-renowned environmentalist Berta Cáceres.

Before her death, Berta and her organization COPINH was long the target of repression by elite Honduran security forces and paramilitary organizations. Earlier this month, four people were arrested in connection with her murder, including Army Major Mariano Díaz Chávez and Edilson Duarte Meza, who is reportedly a retired captain. Press accounts report Díaz Chávez graduated from the prestigious U.S. Ranger-supported Honduran special forces course TESON, raising questions about whether U.S.-trained troops were involved in carrying out Berta’s murder.

The show additionally examines Hillary Clinton’s role as secretary of state during the 2009 coup that ousted Honduran President Manuel Zelaya, and looks at the campaign to release 19-year-old student Wildin Acosta, who is threatened with deportation to Honduras and was detained in his final semester of high school. There have been reports that ICE is launching a brand new month-long campaign of raids specifically aimed at rounding up and deporting undocumented Central American mothers and children.