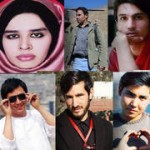 In Afghanistan, the funerals have begun for the 10 journalists killed on Monday—the deadliest day for journalists since the Afghan War began in 2001. Nine journalists died in a double suicide bombing attack in Kabul, including Agence France-Presse’s celebrated photographer Shah Marai.

Worldwide Mourning as 10 Journalists Killed in Afghanistan’s Deadliest Day for Reporters Since 2001
In Afghanistan, the funerals have begun for the 10 journalists killed on Monday—the deadliest day for journalists since the Afghan War began in 2001. Nine journalists died in a double suicide bombing attack in Kabul, including Agence France-Presse’s celebrated photographer Shah Marai. Survivors of the bombing said the suicide bomber was posing as a cameraman. ISIS has claimed responsibility for that attack. A 10th journalist was shot dead Monday in the eastern city of Khost.

“Talking About History Is Way to Liberate America”: New Memorial Honors Victims of White Supremacy
The National Memorial for Peace and Justice opened last week in Montgomery, Alabama—a monument to victims of white supremacy in the United States. The memorial’s centerpiece is a walkway with 800 weathered steel pillars overhead, each of them naming a U.S. county and the people who were lynched there by white mobs. In addition to the memorial dedicated to the victims of lynching, its partner site, the Legacy Museum: From Enslavement to Mass Incarceration, also opened last week.