The ACLU of Michigan has just released a film, featured on today’s show: “Here’s to Flint,” which tells of how local activists, scientists and others organized to expose the poisoning of the town’s water. 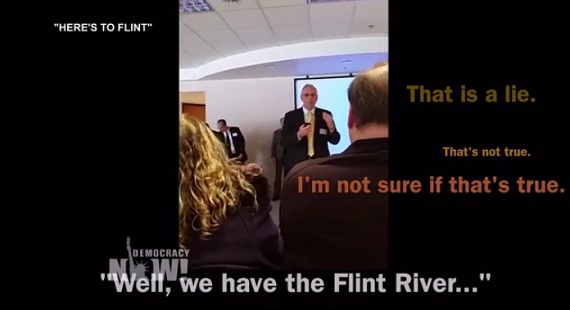 Video still courtesy of Democracy Now! from the new film “Here’s to Flint.”

The Democratic Presidential candidates have both taken up the cause of Flint, Michigan and its ongoing water crisis. The ACLU of Michigan has just released a film, featured on today’s show: “Here’s to Flint,” produced by Michigan Journalist of the Year Curt Guyette and filmmaker Kate Levy. The documentary tells of how local activists, scientists and others organized to expose the water poisoning.

Today’s edition also honors Honduran human rights campaigner Berta Cáceres, who was assassinated last week. Berta was one of the country’s most well-known environmental and indigenous leaders. Her companion at the time, fellow activist Gustavo Castro Soto, is reportedly being detained constantly and is in fear of his own life.

Here is what Berta said when she won the 2015 Goldman Environmental Prize:

Our Mother Earth, militarized, fenced-in, poisoned, a place where basic rights are systematically violated, demands that we take action.