In the Belgian capital, Brussels, explosions have hit the international airport and a city metro station, reportedly killing more than two dozen people and wounding scores of others. 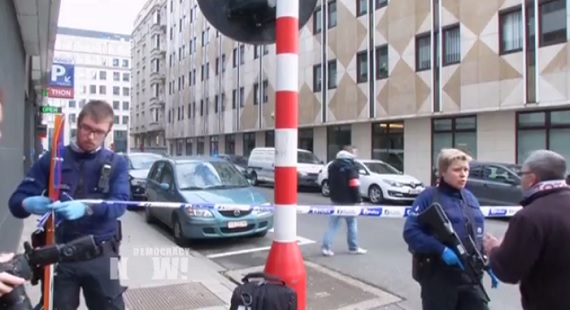 A police line in the aftermath of the Brussels attacks. Image: video still

In the Belgian capital, Brussels, explosions have hit the international airport and a city metro station, reportedly killing more than two dozen people and wounding scores of others. Amy Goodman interviews Yousef Munayyer, executive director of U.S. Campaign to End the Israeli Occupation, on the links between these attacks and the situation in Syria. Munayyer had this to say:

I think the attacks today really underscore the urgent crisis and catastrophe that is taking place in Syria and the need for the international community to redouble its efforts to address in a serious way the civil war that is going on there that has really given rise, through the failure of the Syrian state, the vacuum of power that exists between Syria and Iraq, to this monster that we have come to know as ISIS, which has metastasized around the globe.

Also today, the show reports how all of the Presidential candidates except for Bernie Sanders attended the pro-Israel American Israel Public Affairs Committee Monday. In her address to the conference, Hillary Clinton sought to place herself as a greater ally to Israel than Donald Trump. Amy Goodman hosts a debate between Munayyer and Robert Freedman, a political science professor, on the candidates’ positions and the Israel-Palestine conflict in general.