“Fascism: Could it happen here?” That’s a question increasingly being raised as Republican presidential front-runner Donald Trump continues his bid for the White House. Rest of Robert Paxton interview. 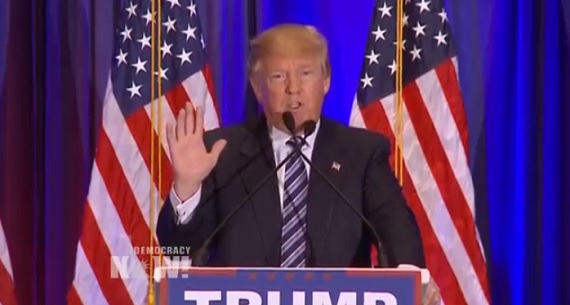 Is this man a fascist?

In what’s being billed Super Tuesday 3, Democratic and Republican voters head to the polls today for primaries and caucuses in Florida, Illinois, Missouri, North Carolina and Ohio.

Amy Goodman interviews Mickey Edwards, a former Republican congressmember from Oklahoma. He served as chair of the House Republican Policy Committee and was a founding trustee of the conservative Heritage Foundation. He is author of the book The Parties Versus the People: How to Turn Republicans and Democrats into Americans. About Donald Trump, he says: “You know, he wants to deal with the animals by making us animals.”

Meanwhile, pPeople as varied as actor George Clooney, comedian Louis C.K. and Anne Frank’s stepsister Eva Schloss have suggested Trump is a fascist. Amy Goodman speaks with Robert Paxton, the father of fascism studies, who recently wrote an article titled, “Is Fascism Back?” Here is his essay on the five stages of fascism.

Note: the audio above only contains part 1 of that interview. Here is part 2.

Flashback: The 14 Defining Characteristics of Fascism

From Is Fascism Back? by Robert Paxton

Donald Trump is a special case altogether. Superficially, he seems to have borrowed a number of fascist themes for his presidential campaign: xenophobia, racial prejudice, fear of national weakness and decline, aggressiveness in foreign policy, a readiness to suspend the rule of law to deal with supposed emergencies. His hectoring tone, mastery of crowds, and the skill with which he uses the latest communications technologies also are reminiscent of Mussolini and Hitler.

And yet these qualities are at most derivative of fascist themes and styles; the underlying ideological substance is very different, with the entitlements of wealth playing a greater role than fascist regimes generally tolerated. Trump’s embrace of these themes and styles is most likely a matter of tactical expediency – a decision taken with little or no thought about their ugly history. Trump is evidently altogether insensitive to the echoes his words and oratorical style evoke, which should not be surprising, given his apparent insensitivity to the impact of every other insult that he hurls.

It is too bad that we have so far been unable to furnish another label with the toxic power of fascism for these abhorrent people and movements. We will have to make do with more ordinary words: religious fanaticism for the Islamic State, reactionary anarchism for the Tea Party, and self-indulgent demagoguery on behalf of oligarchy for Donald Trump. There are fringe movements today, such as Aryan Nations in the United States and Golden Dawn in Greece, that draw openly upon Nazi symbolism and employ physical violence. The term “fascist” is better left to them.