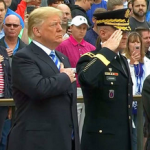 On Monday evening, Donald Trump abruptly called off today’s planned visit by the Super Bowl-winning Philadelphia Eagles, after it became clear that most of the team had opted out of the event.

Going “Full Dictator”? Trump Claims He Has Right to End Mueller Investigation or Pardon Himself
As President Trump celebrated his 500th day in office Monday, many legal experts warned that the country could soon face a constitutional crisis as the president continues to attack special counsel Robert Mueller’s investigation. On Monday, Trump tweeted, “The appointment of the Special Counsel is totally UNCONSTITUTIONAL!” He also tweeted, “As has been stated by numerous legal scholars, I have the absolute right to PARDON myself.” Over the weekend, The New York Times published a 20-page confidential letter written by Trump’s lawyers to special counsel Robert Mueller, in which his lawyers claim Trump is above the law and thus cannot have illegally obstructed the Mueller investigation. Trump’s attorneys also claim the Constitution gives the president power to terminate the Mueller probe.

Trump Cancels Philadelphia Eagles’ WH Visit Amid Feud with Players over Racial Justice Protests
On Monday evening, Donald Trump abruptly called off today’s planned visit by the Super Bowl-winning Philadelphia Eagles, after it became clear that most of the team had opted out of the event. In a statement announcing the decision, Trump said, “The Philadelphia Eagles are unable to come to the White House with their full team to be celebrated tomorrow. They disagree with their President because he insists that they proudly stand for the National Anthem, hand on heart, in honor of the great men and women of our military and the people of our country.” But not a single Eagles player kneeled during the national anthem in the 2017 season. Several members of the Philadelphia Eagles announced in February that they wouldn’t visit the White House for the traditional Super Bowl victory celebration, as a protest against President Trump. Among them are Malcolm Jenkins, Torrey Smith and Chris Long.

“Hidden Horrors”: Reporter Debbie Nathan on Mass Trials & Kids Separated from Parents at the Border
Immigrants are facing mass trials and family separation at the U.S.-Mexico border, as the government implements “zero tolerance” policies directed at those trying to enter the United States. Mass trials for crossing the border, and scattered cases of family separations, have taken place since “Operation Streamline” was first introduced in 2005. But last month, Attorney General Jeff Sessions announced the federal government will now prosecute “100 percent of illegal southwest border crossings.”

In Narrow Ruling, Supreme Court Sides with Baker Who Refused Cake to Same-Sex Couple
The Supreme Court ruled Monday in favor of a Colorado baker who refused to make a wedding cake for a gay couple, citing his religious opposition. In a narrow 7-2 decision, the justices faulted the Colorado Civil Rights Commission’s handling of the claims brought against baker Jack Phillips, saying the commission had shown a hostility to religion. Though the case pitted claims of religious freedom against the fight for gay rights, the ruling stopped short of setting a major precedent on whether businesses can deny people services because of their sexual orientation.

One thought on “Going “Full Dictator”? Trump Claims He Has Right to End Mueller Investigation or Pardon Himself”