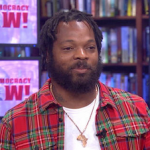 Over the past two seasons, dozens of National Football League players have knelt during the national anthem to protest police shootings of black teenagers and men like Antwon Rose, a 17-year-old unarmed African-American teenager who was shot dead by East Pittsburgh police last week.

“Things That Make White People Uncomfortable”: NFL’s Michael Bennett on Kneeling for Racial Justice
Over the past two seasons, dozens of National Football League players have knelt during the national anthem to protest police shootings of black teenagers and men like Antwon Rose, a 17-year-old unarmed African-American teenager who was shot dead by East Pittsburgh police last week. The NFL’s on-field protests began in August 2016 when quarterback Colin Kaepernick refused to stand for the anthem to protest racism and police brutality. The National Football League announced last month that it will fine teams if players refuse to stand for the national anthem before games. Under the new rules adopted by the league’s 32 owners, players will be allowed to stay in the locker room during the anthem. NFL three-time Pro Bowler and longtime activist Michael Bennett has been part of a movement, led by former 49ers quarterback Colin Kaepernick, protesting police shootings of unarmed black men. Bennett was recently traded to the Super Bowl champions Philadelphia Eagles—the same team President Trump recently disinvited to the White House. He is the author of a new book, “Things That Make White People Uncomfortable.”

Michael Bennett Speaks Out About Trauma of Growing Up Black in America & His “Emmett Till Moment”
When Michael Bennett was 12 years old, James Byrd was lynched in Jasper, Texas. The African-American man was brutally murdered by white supremacists who chained him to the back of their truck by his ankles and dragged him for more than three miles along the road. By the time the men untied his body from the back of the truck, Byrd’s head and right arm had been severed. Michael Bennett calls this killing his “Emmett Till moment.”

Michael Bennett on Concussions & Brain Injuries in NFL: “Fans Need to Stop Dehumanizing Players”
More than 280 players in the National Football League sustained concussions in the 2017 season. That’s an average of 12 per week. A recent study of the brains of 111 deceased NFL players found all but one were found to have CTE, chronic traumatic encephalopathy. CTE is a degenerative brain disease linked to repeated blows to the head. NFL three-time Pro Bowler and longtime activist Michael Bennett speaks about CTE, the risks athletes take while playing football and how fans need to humanize the players they love to watch on screen.

Psychologist: Separating Children at the Border Creates Trauma Passed Down Through Generations
More than 2,000 migrant children remain separated from their parents, jailed in detention centers across the country. The Washington Post reports that U.S. authorities are collecting mug shots of the detained minors, some showing the children in tears. Immigrant children jailed in a converted Walmart in Texas are being forced to recite the Pledge of Allegiance in English each morning. At some of the facilities, the children are counted in “prison-style” head counts. In some cases, parents have already been deported, while their children remain in United States custody.