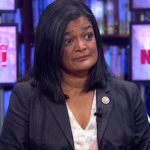 Outrage is growing over the Trump administration’s separation of children from their parents along the U.S.-Mexico border. On Monday, ProPublica released audio from inside a U.S. Customs and Border Protection facility.

“Trump Creates Crises & Preys on Fear”: Rep. Jayapal on Policy of Separating Kids from Parents
Outrage is growing over the Trump administration’s separation of children from their parents along the U.S.-Mexico border. On Monday, ProPublica released audio from inside a U.S. Customs and Border Protection facility, in which children estimated to be between the ages of 4 and 10 years old are heard crying “Mama” and “Papi” after being separated from their parents. In another part of the audio, a Border Patrol agent is heard joking, in Spanish, “Well, we have an orchestra here. What’s missing is a conductor.” Video footage released by the U.S. Border Patrol Monday shows migrant children in concrete-floored chain link cages, in an old warehouse in McAllen, Texas. A new Quinnipiac Poll shows roughly two-thirds of U.S. voters oppose separating children from their parents at the border. About 7 percent of Democratic voters support the Trump policy, while 55 percent of Republicans support it. Rep. Pramila Jayapal is a Democratic congressmember from Washington state. She has just helped announce a march on Washington and cities nationwide on June 30 against family separation. She is vice ranking member of the House Budget Committee and vice chair of the Congressional Progressive Caucus. On June 9 she visited a detention center in her home state and spoke with some of the 200 asylum-seekers held at the Sea-Tac Bureau of Prisons facility.

Caged Children & Terrified Infants: Rep. Sheila Jackson-Lee Describes “Acts of Indecency” at Border
President Trump is continuing to blame Democrats for his administration’s practice of separating at least 2,000 children from their parents in recent weeks. He also doubled down on the practice in an address Monday, ahead of his meetings today with Republicans to discuss compromise legislation on a hardline immigration bill. Rep. Sheila Jackson-Lee, Democrat of Texas, has represented the 18th Congressional District since 1995, which includes most of central Houston. She is just back from the Texas border with Mexico, where she joined a delegation of lawmakers who visited a processing center in McAllen, Texas, and the Southwest Key Programs’ Casa Padre, which houses 1,500 children in Brownsville, Texas.

As Demonstrators Demand Nicaraguan President’s Resignation, Government Accuses Opposition of Coup
The political crisis in Nicaragua is intensifying. More than 178 people have been killed since widespread demonstrations to oust Nicaraguan President Daniel Ortega began in mid-April, when his government announced plans to overhaul and slash social security. Amnesty International has accused the Nicaraguan government of using “pro-government armed groups to carry out attacks, incite violence, increase their capacity for repression and operate outside the law.” But the Nicaraguan government has blamed part of the violence on armed members of the opposition who are trying to overthrow the democratically elected government.