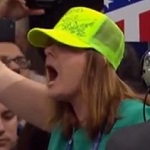 Thousands of Republican Party delegates are in Cleveland, Ohio, for the 2016 Republican National Convention, where the party is expected to formally nominate Donald Trump as the party’s presidential nominee. But not all delegates are happy about Donald Trump, and on Monday the RNC briefly descended into chaos as members of the Never Trump movement launched a revolt. 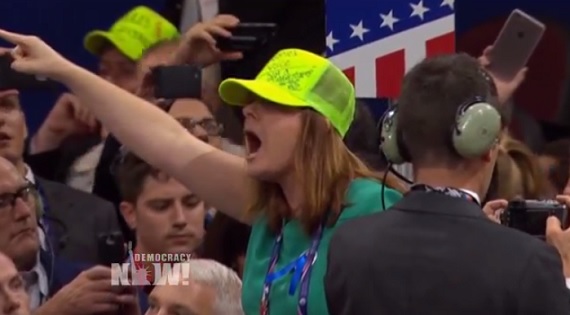 Thousands of Republican Party delegates are here in Cleveland, Ohio, for the 2016 Republican National Convention, where the party is expected to formally nominate Donald Trump as the party’s presidential nominee. But not all delegates are happy about Donald Trump, and on Monday the RNC briefly descended into chaos as members of the Never Trump movement launched a revolt by demanding for a roll call vote—a lengthy process that would allow every state to have their vote count. However, when the time came to present the proposed rules to the full convention, the Trump campaign and Republican Party leadership quashed the rebellious faction by instead opting for a voice vote—quickly declaring the opponents lacked enough votes. Pandemonium erupted on the floor, with shouts for a roll call vote being drowned out by Trump supporters chanting “U.S.A.! U.S.A.!” Democracy Now!’s Deena Guzder reports.

On Monday afternoon, the RNC briefly erupted in chaos when some opponents of presumptive presidential nominee Donald Trump stormed off the convention floor and others chanted in protest at their failure to win a symbolic vote opposing Trump’s candidacy. The high-profile floor fight pitted the Trump campaign and Republican National Committee leadership against a faction of delegates from the Never Trump movement, shattering any notion of a unified Republican Party. While Trump’s detractors acknowledge they were unlikely to be able to vote down the rules, they say they were seeking a roll call vote to register their dissent over a Trump candidacy. For more, we host a debate. Kendal Unruh is a Colorado delegate at the Republican National Convention and a leader in the national Never Trump movement. Raju Chinthala is an Indiana state delegate who is backing Donald Trump.

On Monday night, Donald Trump’s wife Melania Trump gave the keynote address. But the speech was not without controversy. Many commentators have accused Melania Trump of plagiarizing parts of first lady Michelle Obama’s speech from the 2008 Democratic National Convention. Amy Goodman asked two Republican delegates for their reaction.

We go to Baltimore to get reaction to the acquittal of a third police officer on all charges for his role in the arrest of Freddie Gray, who died of spinal injuries last year after he was arrested and transported in a police van. Lt. Brian Rice, the highest-ranking officer on the scene, faced charges of involuntary manslaughter, misconduct in office and reckless endangerment. Judge Barry Williams had dropped a charge of second-degree assault at the trial’s midpoint. Amy Goodman spoke to Sheryl Wood, a former federal prosecutor and legal analyst; and Kwame Rose, a Baltimore activist and producer with The Real News Network. He was convicted for failing to obey an order from law enforcement while protesting the December mistrial of Officer William Porter. Rose’s appeal begins today.

As the Republican National Convention began on Monday, thousands rallied outside to protest Donald Trump’s candidacy. In the largest protest of the day thousands took part in the “End Poverty Now, March for Economic Justice.” Democracy Now! spoke with activists and organizers who took to the streets after a concert by Prophets of Rage, a new project of Public Enemy’s Chuck D and Rage Against the Machine’s Tom Morello.

The show examines the record of Donald Trump and his running mate, Indiana Governor Mike Pence, on LGBT rights and restricting women’s access to reproductive healthcare with Dawn Laguens, executive vice president and chief experience officer of Planned Parenthood Federation of America and the Planned Parenthood Action Fund. In 2015, Pence signed into law the highly controversial anti-LGBT Religious Freedom Restoration Act, which gave businesses license to discriminate against LGBT people. The law caused a nationwide backlash. Dozens of companies and professional sports teams and leagues, including the Indianapolis-headquartered NCAA, threatened to boycott Indiana. Apple CEO Tim Cook slammed the law, likening it to the Jim Crow laws of the American South. Ultimately, Pence was forced to enact a revision specifying the law does not authorize anti-LGBT discrimination. As governor, Pence also oversaw a cut in Planned Parenthood funding in the state and signed legislation, since blocked, that would have restricted abortion access statewide. In 2011, he threatened to shut down the entire government if Congress didn’t defund Planned Parenthood.

Egyptian comedian Bassem Youssef is also covering the Republican convention. His former show was known as “The Daily Show” of the Arab world for its satire of politics in Egypt and the Middle East. The program “El Bernameg” was launched after former Egyptian President Hosni Mubarak was ousted from power in the 2011 uprising. It became the most popular TV series in Egypt’s history, with as many as 30 million views per episode. During Mohamed Morsi’s presidency, “El Bernameg” came under increasing pressure, and in 2013 an arrest warrant was issued for Youssef for allegedly insulting Islam and Morsi. Youssef was interrogated and subsequently released on bail, but the pressure continued under the next regime, and in 2014 he announced he was taking the program off the air, just days after General Abdel Fattah el-Sisi was elected president. Once he could no longer make fun of Egyptian politics, he moved to the U.S. to satirize American politics. His new show, “Democracy Handbook,” airs on Fusion.