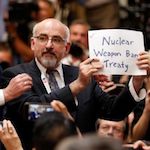 Before Monday’s joint press conference with Trump and Putin, one of the reporters was forcibly removed from the room. Katrina vanden Heuvel, editor and publisher of The Nation, criticizes the media reaction for lacking perspective. Plus an interview with Boots Riley, writer and director of the critically acclaimed film “Sorry to Bother You.”

Before Monday’s highly anticipated joint press conference with President Trump and Russian President Vladimir Putin, one of the reporters was forcibly removed from the room. Sam Husseini was credentialed to cover the summit for The Nation magazine, and earlier in the day he tweeted, “The issue isn’t Trump. The issue isn’t Putin. The issue is the issues: Nuclear threats, Syria, etc.” Before Trump and Putin spoke at the press conference, video shows Husseini holding a piece of paper that reads “Nuclear Weapon Ban Treaty.” A security official aggressively tries to take the sign from him. We speak with Husseini about his arrest and the questions he was trying to raise. “It wasn’t a protest,” he says. “It was just an attempt to do serious, aggressive journalism, which I think is what we need.”

President Trump drew bipartisan outrage from lawmakers and media outlets Monday after meeting with Russian President Vladimir Putin in Helsinki and lashing out at his own intelligence agencies over the investigation of alleged Russian interference in the 2016 election. Katrina vanden Heuvel, editor and publisher of The Nation, calls the Trump and Putin press conference “bizarre and surreal,” but says the media reaction lacked perspective: “I think that people kind of lost their bearings.”

An evil telemarketing company, a corporation making millions off of slave labor, and one Oakland man at the center of it all who discovers a secret that threatens all of humankind. Boots Riley’s “Sorry to Bother You” is the dystopian social satire being hailed as one of the best movies of the summer. The film’s stars include Lakeith Stanfield, Tessa Thompson, Armie Hammer, Terry Crews and Danny Glover. We speak with Boots Riley, writer and director of the critically acclaimed film. He is a poet, rapper, songwriter, producer, screenwriter, humorist, political organizer, community activist, lecturer and public speaker—best known as the lead vocalist of The Coup and Street Sweeper Social Club.