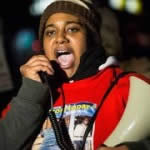 In Harlem, New York, hundreds of people attended the funeral of anti-police brutality activist Erica Garner, who died at the age of 27 on December 30 after an asthma-induced heart attack, four months after giving birth to her second child. Erica’s father Eric Garner was brutally choked to death by police in 2014.

“Her Heart Was Attacked”: Hundreds Gather in Harlem for Funeral of Erica Garner
In Harlem, New York, hundreds of people attended the funeral of anti-police brutality activist Erica Garner, who died at the age of 27 on December 30 after an asthma-induced heart attack, four months after giving birth to her second child. Erica’s father, Eric Garner, was killed when police officers in Staten Island wrestled him to the ground, pinned him down and applied a fatal chokehold in 2014.

“It’s a Nightmare for Us”: Up to 250,000 Salvadorans Face Deportation After Trump TPS Decision
President Trump is meeting with Republican and Democratic lawmakers at the White House today over his offer to protect the nearly 800,000 young undocumented immigrants known as DREAMers in exchange for funding to build a border wall. The meeting comes one day after the Trump administration announced it is ending the temporary protected status for as many as 250,000 Salvadorans who have been living in U.S. since 2001. The temporary protected status, known as TPS, had given the Salvadorans legal permission to live and work in the United States. It was enacted in 2001 after a devastating pair of earthquakes hit El Salvador. The Trump administration has already said it will end temporary protected status for tens of thousands of Haitian, Nicaraguan and Sudanese immigrants living in the United States.

Rev. Barber & Ex-Page to Segregationist Strom Thurmond Unite to Launch New Poor People’s Campaign
As the nation prepares to mark Martin Luther King Day next week, modern day civil rights leaders have launched a new Poor People’s Campaign, inspired by the historic 1968 action led by King and the Southern Christian Leadership Conference. In the coming months, organizers are planning six weeks of direct action at statehouses across the country and the U.S. Capitol to call attention to systemic racism, poverty, the war economy and ecological devastation. Reverend William Barber is president and senior lecturer of Repairers of the Breach. He’s the leader of Moral Mondays and the author of “Third Reconstruction: Moral Mondays, Fusion Politics, and the Rise of a New Justice Movement.” Jonathan Wilson-Hartgrove is an evangelical minister and director of the School for Conversion in Durham, North Carolina. He is author of the upcoming book, “Reconstructing the Gospel: Finding Freedom from Slaveholder Religion.” Wilson-Hartgrove grew up as a white Southern Baptist, and he served as a page for the late South Carolina Senator Strom Thurmond, a fierce foe of the civil rights movement and supporter of segregation. Wilson-Hartgrove’s political transformation began after hearing William Barber preach.

Rev. William Barber: Trump is a Symptom of a Deeper Moral Malady Behind Racist, Xenophobic Policies
Rev. William Barber talks about the Poor People’s Campaign, the Republican Party’s embrace of President Trump’s racist policies, threats to voting rights and the GOP’s remaking of the federal courts. Rev. William Barber is president of Repairers of the Breach and the author of “Third Reconstruction: Moral Mondays, Fusion Politics, and the Rise of a New Justice Movement.”