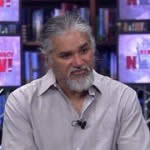 Exclusive: Ravi Ragbir Speaks Out After Being Freed from “Unnecessarily Cruel” ICE Detention
On Monday, a federal judge in New York City ordered the immediate release of immigrant rights leader Ravi Ragbir from immigration jail, calling his detention “unnecessarily cruel.” In a decision read aloud from the bench, District Judge Katherine Forrest said Ragbir had “the freedom to say goodbye,” and compared his treatment to that of “regimes we revile as unjust, regimes where those who have long lived in a country may be taken without notice from streets, home, and work. And sent away. We are not that country; and woe be the day that we become that country under a fiction that laws allow it.” Ragbir is the executive director of the New Sanctuary Coalition. He’s one of a handful of high-profile immigrant rights activists who have been targeted by the Trump administration.

Ravi Ragbir of the New Sanctuary Coalition: I Was Detained Because of Our Immigration Activism
Last month, Ravi Ragbir was one of several nationally recognized activists to be taken into custody by Immigration and Customs Enforcement. He was handcuffed and arrested during his routine check-in on January 11, prompting a mass protest that ended with 18 arrested, including two members of the New York City Council. Ravi was then quickly flown by ICE, in shackles, to the Krome Detention Center in Florida. As he faced imminent deportation to his native Trinidad, public outcry grew. Then ICE informed his lawyers that he would be brought back to detention in the New York City area. On Monday, U.S. District Judge Katherine Forrest said Ragbir’s detention was “unnecessarily cruel,” and ordered ICE to free him. But he still faces deportation.

Two Immigrants Detained in NJ While Taking Children to School; Third Seeks Sanctuary in Church
In New Jersey, immigrant rights advocates and faith leaders are speaking out against the Immigration and Customs Enforcement agency for detaining multiple parents while they were taking their children to school. On Thursday, Roby Sanger was detained by ICE after dropping his two daughters off at school, while Gunawan Liem was detained after he dropped his daughter off at the school bus stop. Both men are Indonesian. A third man, also from Indonesia, Harry Pangemanan, has taken sanctuary at the Reformed Church of Highland Park in New Jersey, after he says he saw undercover ICE agents waiting outside his home as he was preparing to drive his daughter to school. All three are parents of U.S.-born children. For more, we speak with Seth Kaper-Dale, pastor of the Reformed Church of Highland Park, where Harry Pangemanan has sought sanctuary.