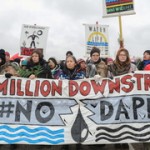 “Women Will Die Because of This”
Just two days after millions of people poured into the streets of Washington, D.C., and cities around the world for the historic Women’s March on Washington, President Trump has reinstated the controversial “global gag rule,” which women’s rights advocates fear will increase unsafe abortions around the world. The policy originated in the Reagan era and bans U.S. funding for any international healthcare organizations that perform abortions or advocate for the legalization of abortion or even mention it, even if those activities are funded by non-U.S. money. Trump signed the order surrounded by seven other men.

Outright Lies, Constant Tweets & “Alternative Facts”
This segment looks at President Trump, the media and what the new administration calls “alternative facts.” On Saturday, in his first full day in office, Trump visited CIA headquarters. Speaking in front of the CIA Memorial Wall, he told the agency he had a running war with the media. Hours later, Trump then ordered his new press secretary, Sean Spicer, to hold an emergency press briefing to claim, “This was the largest audience to ever witness an inauguration, period, both in person and around the globe.” Then, on Sunday, Trump’s adviser, Kellyanne Conway, defended Spicer’s demonstrably false statement by saying he “gave alternative facts.”

“Nobody Speak”: New Documentary Probes Billionaire Peter Thiel’s Destruction of News Outlet Gawker
Last year, the digital media outlet Gawker declared bankruptcy and put itself up for sale after it was ordered to pay $140 million in a lawsuit for publishing the sex tape of wrestler Hulk Hogan. Hogan’s lawsuit was financially backed by Silicon Valley billionaire and Trump supporter Peter Thiel, who was outed as gay by a now-defunct Gawker blog. The case is now the focus of a new movie premiering at the Sundance Film Festival.

BREAKING: Pres. Trump Signs Executive Order On Dakota Access | The Young Turks
TYT Politics Reporter Jordan Chariton reports on the breaking news of President Trump’s executive orders to fast-track the Dakota Access Pipeline and Keystone XL Pipeline. He also notes that there is no evidence Trump has divested from his shares in Energy Transfer Partners.

Trump Administration Imposes Freeze On EPA Grants and Contracts | ProPublica
Trump’s nominee to head the EPA, Scott Pruitt, has ties to the fossil fuel industry. Not surprising then that the new administration is cutting funds to the EPA.

Get Ready for the First Shocks of Trump’s Disaster Capitalism | The Intercept
Naomi Klein reports on the perils of “disaster capitalism,” a strategy for making use of crises to gut labor standards. One longstanding advocate of this idea? Mike Pence.