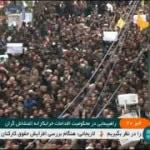 At least 22 people are dead and hundreds have been arrested, as Iranian authorities move to quell the largest anti-government protests since 2009. President Donald Trump responded to the protests on Monday in one of his first tweets of the new year, writing ”TIME FOR CHANGE!”

Glenn Greenwald on Iran Protests: Trump Tweets “Time for Change” While Backing Dictators Worldwide
At least 22 people are dead and hundreds have been arrested, as Iranian authorities move to quell the largest anti-government protests since 2009. President Donald Trump responded to the protests on Monday in one of his first tweets of the new year, writing ”TIME FOR CHANGE!” “This is the same president who, not more than three months ago, announced a ban on Iranians from coming to the United States,” says Pulitzer Prize-winning reporter Glenn Greenwald. “He’s somebody who has aligned with the world’s worst, most savage dictators.”

Glenn Greenwald: Is Facebook Operating as an Arm of the Israeli State by Removing Palestinian Posts?
Facebook is being accused of censoring Palestinian activists who protest the Israeli occupation. This comes as Israeli Justice Minister Ayelet Shaked reportedly said in December that Tel Aviv had submitted 158 requests to Facebook over the previous four months asking it to remove content it deemed “incitement,” and said Facebook had granted 95 percent of the requests. Pulitzer Prize winner Glenn Greenwald discusses his new report for The Intercept headlined “Facebook Says It Is Deleting Accounts at the Direction of the U.S. and Israeli Governments.”

Glenn Greenwald on Trump-Russia Probe: Be Skeptical of Spy Agencies with History of Lying & Deceit
Three major U.S. news outlets in early December promoted a story alleging WikiLeaks had secretly offered the Trump campaign special access to the Democratic National Committee emails before they were published. The reports suggested the correspondence proved collusion between the Trump family and Russia, since the U.S. intelligence community regards WikiLeaks as an “arm of Russian intelligence.” It turns out this information was false. The issue of collusion with Russia was also a key focus in President Trump’s recent interview with reporter Michael Schmidt of The New York Times, where Trump said repeatedly, “There was no collusion. … There was no collusion.”